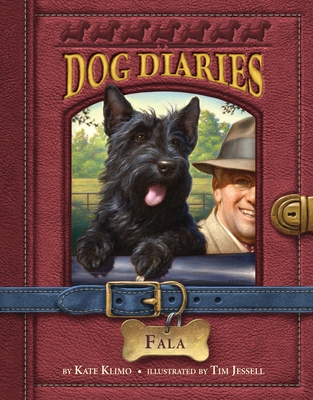 This is book number 8 in the Dog Diaries series.

As President Franklin Delano Roosevelt’s nearly constant companion, Fala the Scottish terrier was in the unique position to witness the workings of the U.S. presidency. And now for the first time, the sassy Scottie shares his story with readers—from his idyllic puppyhood spent chasing squirrels through his adulthood spent chasing dignitaries around the world with FDR! This entertaining tail (that is, tale) gives middle-graders a dog’s-eye view of the events leading up to the United States entering World War II, as well as a look at the private side of FDR’s life in a wheelchair.

Based on primary source material, with realistic black-and-white illustrations and an appendix including information about President Franklin Delano Roosevelt, World War II, Scottish terriers, and more, this is the kind of historical fiction that begs to be read by reluctant readers. It’s a perfect choice for supporting Common Core State Standards.
KATE KLIMO is the author of many books for young readers, including The Dragon Keepers and all the books in the Dog Dairies series. She lives in New Paltz with her husband and two horses, Harry and Fancy. Over the years, she has served as companion to eight dogs: Pal, Beauregard, Fred, Kelly, Bear, Rascal, Dobey, and George W. Currently, she is searching for a furever friend who gets along well with horses. To learn more about her and her work, visit www.kateklimoauthor.com.

TIM JESSELL is an award-winning illustrator whose work has appeared in numerous children's books. He is the illustrator of all the books in the Dog Diaries series. Check out his work at timjessell.com.