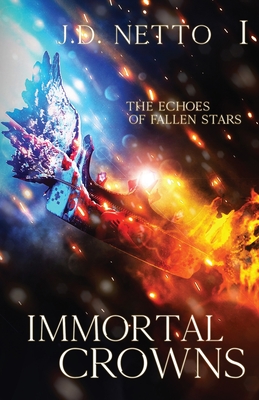 "Netto's prose is urgent and bold, particularly in its more carnal moments. The mythology is dense, but its basis in the traditional story of Lucifer (indeed, the Dove is named Lucifer) makes it easier for the reader to grasp." - KIRKUS REVIEW -

"LUCIFER WASN'T CAST OUT BECAUSE OF REBELLION. IT WAS HIS LOVE FOR THE CREATOR THAT DOOMED HIM."

Five thousand years ago, when mortals were a mere thought in the mind of their creator, Lucifer was cast out of the immortal realm of Valleyner, doomed to spend his days in the Dark Beyond. After Hanell the Creator, the Pale Lion, fashioned the mortal world of Thestlen, a secret concealed from mortals brought on grave consequences.

In the remote village of Heedeon, Bellwound Throvar and Arnon Helvug are visited by immortals from shadow and light. A weapon known as the Mezar is found, believed to house the Luciferian Epistle written before he, the Dove, suffered judgement by the Regent, gods of ultimate power and parents to Hanell the Creator.

The two boys set out on a journey with a Nephilin, hoping to find answers to their mysterious past. But secrets and lies do not ask for the right time to strike. A dark tale spreads, whispers that the Dove was expelled by the Pale Lion not because of rebellion, but because of their forbidden love for one another. While struggling to confess his true feelings for Arnon, Bellwound realizes that love won't be enough to save them from their doom, especially if the doom was caused by love itself.

As they travel across forests, deserts, and seas, they discover that the ploy of the gods will not only change their own world but will also claim lives, crowns, and kingdoms.

Immortal Crowns is the beginning of a new tale riddled with betrayal, romance, war, and deceit.

"This book read like I was binging a series It kept me hooked until the end. What a great queer-hero coming of age story I can't wait for part II." - Jose on Goodreads

"I have been following the work of JD Netto for a while, and this last book turned out to be my favorite, a piece of art, or magic." - Nickolas on Goodreads

"The characterization was also really well done. The characters weren't two-dimensional at all, and each one breathed life into the pages in their own ways." - N.M. Lambert on Goodreads

"As far as spicy scenes, they are not overly descriptive but they are detailed enough to make this reader blush." - Liz on Goodreads