The Philosophy of Size and the Essence of Enough: A Minimalist Treatise (Paperback) 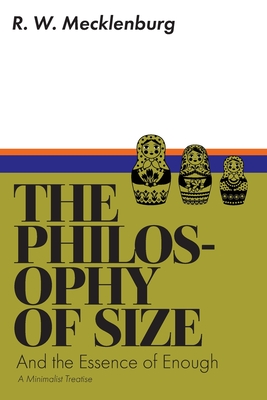 The Philosophy of Size and the Essence of Enough: A Minimalist Treatise (Paperback)

R. W. Mecklenburg makes a supremely rational and surprisingly simple argument for minimalism in The Philosophy of Size and the Essence of Enough, in which he harmonizes an eclectic body of ideas into one masterful treatise about girth.

Whereas many thinkers have treated minimalism as it concerns human possessions, Mecklenburg advances their ideas one step further to concern it with all aspects of human life, from economies, polities, and societies, to Joe and the junk in his garage. If nature is universal, then are its laws not equally so? Mecklenburg answers with a resounding yes.

Where the cancerous cell grows beyond its bounds to destroy its host, it similarly destroys its institutions, too. If economic monopolism, political globalism, and social Marxism promise to destroy them, then the cure lies in political, economic, and social subsidiarity, Mecklenburg opines. In other words, we must make things smaller to make them freer. And once we have, how are small things to cooperate? Based on their complementary values, he opines again.

"The smaller something is, the more voluntary it is" is the mantra on which Mecklenburg most thrives. Because corporatism, globalism, and media culture have become inescapably big, The Philosophy of Size derides them each and their bedfellows: the consumerists who have enabled them. He makes the case for quality over quantity. For being a big fish in a small pond. For having fewer but better things. For not living under a tyranny of things and global abstractions. Without them, we can be light enough to pursue happiness on our own terms.