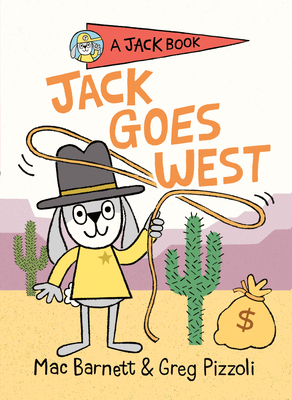 This is book number 4 in the A Jack Book series.

Jack and the Lady take the train West to visit a dude ranch. One night, there's a bank robbery next door, and Jack is pegged as the bandit. But thanks to Jack's new rope tricks, the real robber is caught, and Jack leaves the Wild West a free rabbit with a big secret.

Greg Pizzoli is an author, illustrator, and printmaker. His first picture book, The Watermelon Seed, won the Theodor Seuss Geisel Award, and his book Good Night Owl was a Geisel Honor Book. His Viking nonfiction picture book Tricky Vic was a New York Times Best Illustrated Book of 2015. He lives in Philadelphia.
“Bank on fun with this one—it'll rope readers in.” –Kirkus Reviews

★ “Barnett works wonders with a limited vocabulary, packing the stories with humor, tension—and admonishments of Jack. Pizzoli’s scruffy-edged, emotive cartoons are just as funny, and he carries the comedy into drawing lessons and closing endpapers.” –Publishers Weekly, starred review

★ "Jack is a rule-proof bundle of bunny-eared id who does as he pleases, and therein lies his considerable charm.” –BCCB, starred review

“This series title will be a surefire hit with readers who love Mo Willems’s Elephant & Piggie books.” –School Library Journal