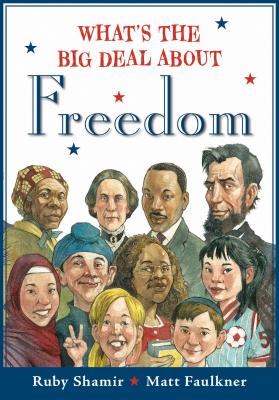 
In Stock—Click for Locations
From the Constitution to abolition, from voting to civil rights, this chapter book for civic-minded young readers filled with fun facts and historical trivia shows how America got the nickname "land of the free." A perfect way to start a conversation about American freedoms with young readers.

It's a "free country"! Why? Because in America we're free to speak our minds, choose our leaders, and set the rules. Since way back when Thomas Jefferson wrote the Declaration of Independence, Americans have stood up for freedom again and again--but it wasn't always easy!

Did you know that Henry "Box" Brown escaped slavery by shipping himself north in a box? Or that Susan B. Anthony was arrested when she tried to vote? Did you know that even young kids protested for the right to go to school?

This entertaining, fact-filled book, perfect for fans of the Who Was series, is a great way to talk about America, its values, and the rights we all enjoy. It celebrates how, with every generation, more and more Americans won the right to be free. Find out how they did it and why standing up for the "land of the free" is such a big deal!

With full-color illustrations throughout and a timeline of American history and additional reading resources at the end, this book is a perfect introduction to the meaning of freedom in America.
Ruby Shamir (www.rubyshamir.com) worked at the White House in the Clinton administration for three and a half years, for two of which she served in the First Lady's office, and she also led Hillary Rodham Clinton's New York Senate office. Now she's an award-winning children's book author and literary researcher in the Bronx, New York, where she lives with her husband and three children. She is the author of What's the Big Deal About First Ladies, What's the Big Deal About Freedom, What's the Big Deal About Elections, and What's the Big Deal About Americans. Follow Ruby on Twitter @ruby_shamir.

Matt Faulkner (www.mattfaulkner.com) is an award-winning children's book author and illustrator who graduated from the Rhode Island School of Design. With 39 illustrated books to his credit, Matt enjoys working on projects both historical and fantastical in nature (and he concentrates very hard not to get them confused). His most recent graphic novel GAIJIN: AMERICAN PRISONER OF WAR (Disney/Hyperion) won the Asian/PacificALA award for 2015. He is married to author and children's librarian, Kris Remenar. They worked together to create the delightful picture book GROUNDHOG'S DILEMMA (Charlesbridge). They live with their two kids and two cats in the lower right hand corner of Michigan. Follow him on Twitter @MattFaulkner1.