Dada Eats Love to Cook It: 100 Plant-Based Recipes for Everyone at Your Table An Anti-Inflammatory Cookbook (Hardcover) 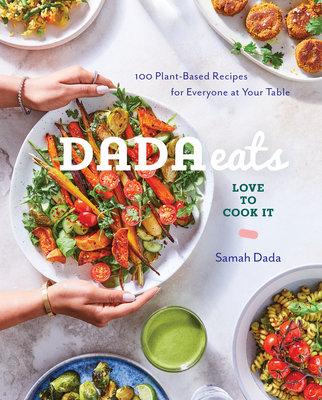 Dada Eats Love to Cook It: 100 Plant-Based Recipes for Everyone at Your Table An Anti-Inflammatory Cookbook (Hardcover)


Not On Our Shelves—Ships in 1-5 Days
A healthy vegetarian cookbook featuring inventive takes on beloved Indian dishes, indulgent desserts, and more, all made with whole foods and anti-inflammatory ingredients—from the Today show’s resident foodie

“When I’m looking for something quick that doesn’t use refined sugars and refined flour, Samah is the person I turn to. I can’t get enough!”—Giada De Laurentiis, New York Times bestselling author of Eat Better, Feel Better

Samah Dada doesn’t buy into the all-or-nothing mentality of healthy eating. By using real, unprocessed ingredients in surprising ways, she shows you how to have your cake and eat it too—because it’s actually made out of chickpeas.

With Dada Eats Love to Cook It, you’ll discover how to use healthy ingredients for maximum flavor and joy.

Grain-Optional. Gluten-Flexible. Mostly Plant-Based. Totally Inclusive.
Samah Dada is a New York City–based recipe developer, food photographer, and the blogger behind Dada Eats. Drawing from her Indian heritage and inspired by the foodscapes of London, California, and New York, she is the host of Cooking with Samah Dada on the Today show’s digital channel.
“When Samah walked onto the Today set, we knew she was special. Her delicious treats would arrive on our desks, and we would happily gobble them up, not even realizing they weren’t just delicious—they were healthy too. From her first on-air appearance on Today, a star was born. She has been unstoppable ever since. I’m not surprised her scrumptious and irresistible treats have made it into the pages of her first cookbook. Open the book and see why, for all of us, it was love at first sight and first bite for Samah!”—Savannah Guthrie, New York Times bestselling coauthor of Princesses Wear Pants and coanchor of NBC’s Today

“Samah has inspired me to delve into simple gluten-free desserts like I never thought I would before. When I’m looking for something quick that doesn’t use refined sugars and refined flour, Samah is the person I turn to. Her desserts are really decadent, so you don’t feel like you’re missing out. My two go-tos are the Chocolate Chip Cookie Pie and the Cookie Dough Truffles—so delicious and easy to make, I can’t get enough!”—Giada De Laurentiis, New York Times bestselling author of Giada’s Italy and Emmy Award–winning television personality

“Samah Dada is a star. Her recipes rock, and her mind-set about cooking is just where you want to be. You will especially love ‘eating your vegetables’ Samah’s way.”—Michael Solomonov, author of Zahav: A World of Israeli Cooking

“In her debut cookbook, Samah Dada brings the fun, warm spirit we’ve come to love on social media and television to the page. Filled with creative, irresistible recipes, Dada Eats Love to Cook It will bring new energy into your kitchen.”—Julia Turshen, bestselling author of Now & Again and founder of Equity at the Table (EATT)

“Samah’s story and food will uplift and inspire. So bright, passionate, and approachable this cookbook is not just a series of beautiful recipes but a life story that will inspire and encourage anyone who is obsessed with food and looking to make it their career. Samah’s food is healthy, happy, and totally welcoming. I love it and I just know I will be going back to this book over and over again. Congrats, Samah!”—Eden Grinshpan, author of Eating Out Loud

“Plant-based treats never looked so good. Samah makes it easy to take the guilt out of guilty pleasure.”—Camila Alves McConaughey, founder of Women of Today

“Dada, host of Cooking with Samah Dada on the Today show online, puts her personal touch on a diverse array of vegan dishes in this inviting debut . . . This turns the idea of healthier cooking into an indulgent affair.”—Publishers Weekly