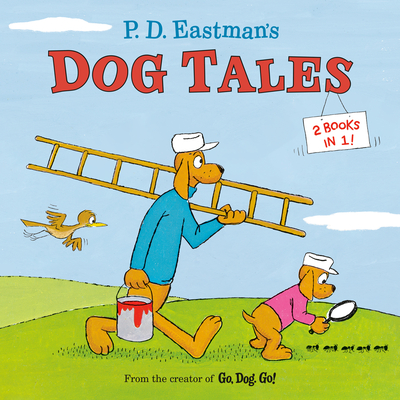 Can't get enough of P.D. Eastman's charismatic canines? Now TWO classic P.D. Eastman concept books featuring some of his other dog characters are available in ONE 8 x 8 paperback volume!

The Alphabet Book
This easy-to-read introduction to the alphabet encourages beginning readers to pair words that start with the same letter, from "an elephant on eggs" to "a zebra with a zither." A handy alphabet running down the side of each page helps kids keep track of where they are!

Big Dog, Little Dog
Meet best friends Fred (Big Dog) and Ted (Little Dog). Though one is big and one is little, and one loves green and one loves red, these pup pals prove that opposites can be the very best of friends.
P. D. Eastman was an author-illustrator who created many children’s books, including Are You My Mother?, Go, Dog. Go!, and The Best Nest. Trained at the National Academy of Design, he enlisted in the army in 1943 and was assigned to the Signal Corps Film Unit—which was headed by Theodor Geisel, who would eventually become known to the world as Dr. Seuss. After Geisel later approached him to write for his new Beginner Book series at Random House, Eastman published his first book, Sam and the Firefly. Since then, Random House has sold more than 30 million books by P. D. Eastman, and he has become one of the most beloved children’s book authors in the world.