Return to Uluru: The Hidden History of a Murder in Outback Australia (Hardcover) 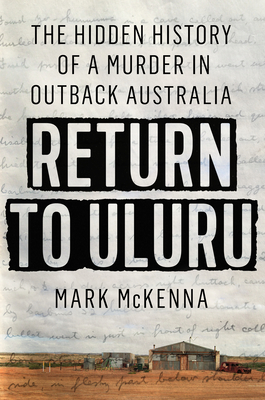 Return to Uluru: The Hidden History of a Murder in Outback Australia (Hardcover)


Not On Our Shelves—Ships in 1-5 Days
"THIS WEEK'S HOTTEST NEW RELEASES: Murder befouls the outback...   [A] gripping work of true crime." —USA TODAY

Return to Uluru explores a cold case that strikes at the heart of white supremacy—the death of an Aboriginal man in 1934; the iconic life of a white, "outback" police officer; and the continent's most sacred and mysterious landmark.

Inside Cardboard Box 39 at the South Australian Museum’s storage facility lies the forgotten skull of an Aboriginal man who died eighty-five years before. His misspelled name is etched on the crown, but the many bones in boxes around him remain unidentified. Who was Yokununna, and how did he die? His story reveals the layered, exploitative white Australian mindset that has long rendered Aboriginal reality all but invisible.

When policeman Bill McKinnon’s Aboriginal prisoners escape in 1934, he’s determined to get them back. Tracking them across the so called "dead heart" of the country, he finds the men at Uluru, a sacred rock formation. What exactly happened there remained a mystery, even after a Commonwealth inquiry. But Mark McKenna’s research uncovers new evidence, getting closer to the truth, revealing glimpses of indigenous life, and demonstrating the importance of this case today. Using McKinnon’s private journal entries, McKenna paints a picture of the police officer's life to better understand how white Australians treat the center of the country and its inhabitants.

Return to Uluru dives deeply into one cold case. But it also provides a searing indictment of the historical white supremacy still present in Australia—and has fascinating, illuminating parallels to the growing racial justice movements in the United States.
Mark McKenna is one of Australia’s leading historians, based at the University of Sydney. He is the author of several prize-winning books, including From the Edge: Australia’s Lost Histories, Looking for Blackfellas’ Point and An Eye for Eternity: The Life of Manning Clark, which won the Prime Minister’s Literary Award for nonfiction.
“THIS WEEK’S HOTTEST NEW BOOK RELEASES... This gripping work of true crime explores a decades-old cold case: How did an Aboriginal man named Yokununna die at one of Australia’s most recognizable landmarks, and what does his death reveal about white Australians' treatment of Aboriginal peoples?”
—USA Today

“Both a crime story and a kind of allegory in which the moral ambiguities of race relations, settler colonialism and Aboriginal indigeneity are condensed and discussed in a vivid moment of violence and tragedy that was denied and lied about for many decades… An admirable, toughminded and absorbing book.”
—The Times Literary Supplement

“An outstanding work of historical detection and riveting storytelling.  Mark McKenna picks up the threads of a cold case and follows their twisty turns to the heartbreaking truth of violent white settlement in Australian Aboriginal country.  If truth is necessary for reconciliation, McKenna’s vivid account is a vital milestone on the journey.”
—Geraldine Brooks, author of the Pulitzer Prize-winning novel March and the international bestsellers Horse, People of the Book, and Year of Wonders

“A vividly told, necessary story of the horrors embedded deep within the colonial history of Australia. Mark McKenna uses the tale of a murder in the 1930s to illuminate the complex history of a sacred place; the harms perpetrated by colonizers and the resistance and resilience of the Indigenous people to whom it belongs. It is an honest, sometimes grim, but ultimately uplifting history.”
—Jennifer Raff, Associate Professor of Anthropology at the University of Kansas, author of Origin: A Genetic History of the Americas

“Richly detailed and superbly conceived, Return to Uluru is a gripping tale of murder and injustice set in the vast heartland of 1930s Australia.  But it is also much more than that.  For in reconstructing what happened in a small cave alongside the dazzling natural wonder Europeans called Ayers Rock, Mark McKenna has provided us with a still relevant portrait of the ongoing clash between indigenous peoples and the so-called modern world.”
—Scott Ellsworth, author of the National Book Award longlisted The Ground Breaking

“Mark McKenna’s fascinating and infuriating narrative of frontier injustice delivers a heady blend of true crime mystery, masterful historical research, and an eloquent call for reconciliation and social justice. With a story as resonant in North America as in McKenna’s Australian homeland, Return to Uluru convincingly outs the “heroes” of frontier expansion for what they truly were: architects of atrocities who quite literally were allowed to get away with murder, so long as their victims were Indigenous people, their culture and their way of life.”
—Edward Humes, Pulitzer Prize winning journalist and author of The Forever Witness

“The violence of racism, hate, and cruelty permeate the global legacy of colonialism, and Australia is a prime case study. In Return to Uluru, Mark McKenna combines a historian’s discernment with craft, compassion, and purpose to paint an unambiguous picture of a horrible wrong from the past and why it matters today. Upending the standard frontier narrative, McKenna offers a white man’s biography in the context of the hate, harm and violence that infused it. But it is not the life story of that man that captivates us. It’s the telling of a series of events ultimately revealed, and best understood, via Indigenous voices, that creates the power and resonance in this book. By framing the events and lives in the context, and words, of The Uluru Statement from the Heart, there is a truth-telling about colonial history. For those readers who are not familiar with Uluru, the Anangu and the realities of what we call “Australia” today, this book is a necessary education and a heartfelt invitation to know and to care.”
—Agustín Fuentes, Professor of Anthropology, Princeton University, author of The Creative Spark

“Honest and thought-provoking, this book takes a hard look at some uncomfortable truths in Australia’s history. Recommended for anyone wanting to examine racism, colonialism, and their continued effects.”
—Library Journal

“Gripping... This eye-opening exposé of an official whitewash delivers the goods.”
—Publishers Weekly

“A killing in Australia sheds light on a long history of violence against Aboriginal people…  A thoroughly researched, well-told story of a true crime that can never see punishment.”
—Kirkus