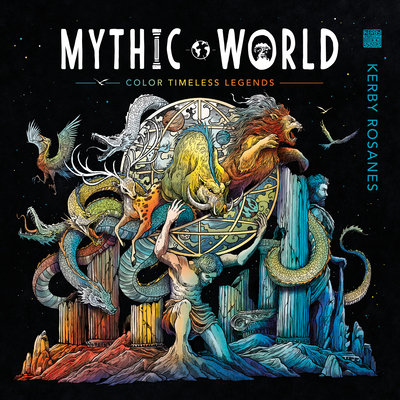 
On Our Shelves Now at:
From Kerby Rosanes, the internationally bestselling artist who brought you the Morphia series, the next book in his brilliant new Worlds universe. Mythic World is 96 double-sided pages of pure mythical creation that colorists will love.

Welcome to Kerby’s mythic world. Mythic World is a new, fantastic, and super-detailed adult coloring book from the prodigious bestselling illustrator. Colorists will find Kerby Rosanes's new creations to be hypnotic, with spread after dizzying spread featuring mythic creatures, magical landscapes, and surprise after surprise in the details of Kerby’s ultra-fine illustrations. This book blurs the line between familiar and magical, between reality and imagination.

Fans and newcomers alike will be thrilled with this 96-page book, providing an apparently endless coloring challenge for even his most dedicated and enthusiastic followers.
Philippines-based illustrator Kerby Rosanes runs the popular Sketchy Stories blog. He works mainly with ordinary black pens to magically illustrate his "doodle" world. Most of his works are characterized by whimsical lines, patterns, characters, and little elements that are spontaneously combined to create massive compositions depicting his everyday experiences or anything that inspires him.