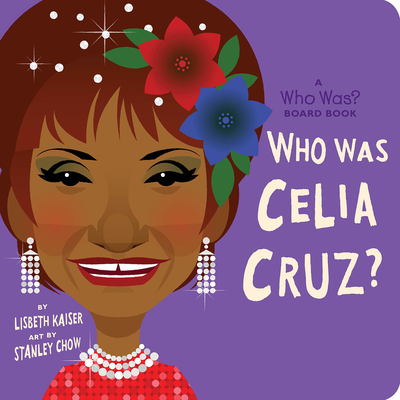 
Not On Our Shelves—Ships in 1-5 Days
The latest addition to the Who HQ board book series: a biography of Celia Cruz, created specifically for the preschool audience!


The #1 New York Times Bestselling Who Was? series expands into the board book space, bringing age-appropriate biographies of influential figures to readers ages 2-4.

The chronology and themes of Celia Cruz's meaningful life are presented in a masterfully succinct text, with just a few sentences per page. The fresh, stylized illustrations are sure to captivate young readers and adults alike. With a read-aloud biographical summary in the back, this age-appropriate introduction honors and shares the life and songs of one of the most influential performers of our time.

WHO WAS? BOARD BOOKS bring inspiring biographies to the youngest readers in an accessible and memorable way.
Lisbeth Kaiser is a freelance writer and bestselling children's book author. She recently wrote Who Was Martin Luther King, Jr.? and Who Was Ruther Bader Ginsburg? in the new WHO WAS? Board Book series. Two of her books in the internationally bestselling Little People, BIG DREAMS series, a biographical picture book and board book series, Maya Angelou and Emmeline Pankhurst, were selected for the ALA's Amelia Bloomer Book List. Lisbeth lives in Brooklyn with her husband and two little readers.

Stanley Chow was born and raised in Manchester, England, where he currently resides. He began his career in 1997 as a fashion illustrator and storyboard artist and has become one of the most highly respected and established artists in the U.K. He works with various media in the advertising, design, publishing, packaging, gaming, animation, and interactive spheres. Most notably, Chow was nominated for a Grammy award for his design work with the White Stripes in 2008, though he is best known for his recognizable illustrations and portraits of the staff writers for New Yorker magazine. More recently he has provided the artwork for Nina Simone's recent posthumously released album Fodder on My Wings, and is the illustrator for the Who Was? Board Book series with Rise x Penguin Workshop.