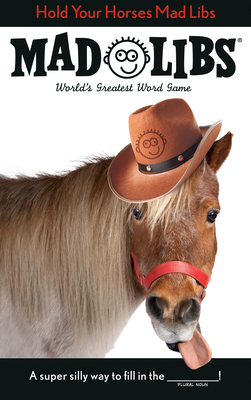 
Not On Our Shelves—Ships in 1-5 Days
Saddle up and put on your riding ARTICLE OF CLOTHING (PLURAL), because Mad Libs is taking a ride with 21 stories about your favorite animal - horses!

You never have to stop horsin' around with Hold Your Horses Mad Libs! Featuring 21 hay-larious fill-in-the-blank stories about the best animal around, Mad Libs is ready to pony up on the stories and make you say "Giddy-up!"
Lindsay Seim is an actor and writer based in Los Angeles. She's appeared in Blumhouse's Insidious: Chapter 2, Adult Swim's Decker and Darren-Lynn Bousman's St. Agatha (Netflix).

In addition to writing several Mad Libs titles (Penguin Random House), Lindsay's essays and short stories have been featured in XO Jane, Betty Confidential, and the Plains Song Review. She is a Hearst Journalism Award recipient and wrote the screenplay for the sci-fi feature film A Wakefield Project, in which she also co-starred.

Lindsay grew up acting in plays written by her sister, Carrie Seim, and riding horses in the wide open spaces of Nebraska.