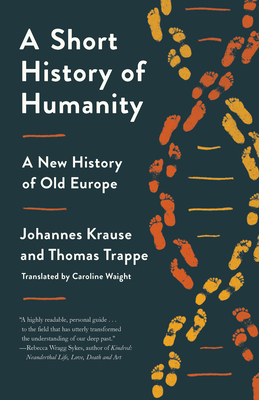 
In Stock—Click for Locations
“Thrilling . . . a bracing summary of what we have learned [from] ‘archaeogenetics’—the study of ancient DNA . . . Krause and Trappe capture the excitement of this young field.”—Kyle Harper, The Wall Street Journal

Johannes Krause is the director of the Max Planck Institute for Evolutionary Anthropology and a brilliant pioneer in the field of archaeogenetics—archaeology augmented by DNA sequencing technology—which has allowed scientists to reconstruct human history reaching back hundreds of thousands of years before recorded time.

In this surprising account, Krause and journalist Thomas Trappe rewrite a fascinating chapter of this history, the peopling of Europe, that takes us from the Neanderthals and Denisovans to the present. We know now that a wave of farmers from Anatolia migrated into Europe 8,000 years ago, essentially displacing the dark-skinned, blue-eyed hunter-gatherers who preceded them. This Anatolian farmer DNA is one of the core genetic components of people with contemporary European ancestry. Archaeogenetics has also revealed that indigenous North and South Americans, though long thought to have been East Asian, also share DNA with contemporary Europeans.

Krause and Trappe vividly introduce us to the prehistoric cultures of the ancient Europeans: the Aurignacians, innovative artisans who carved flutes and animal and human forms from bird bones more than 40,000 years ago; the Varna, who buried their loved ones with gold long before the Pharaohs of Egypt; and the Gravettians, big-game hunters who were Europe’s most successful early settlers until they perished in the ice age.

Genetics has earned a reputation for smuggling racist ideologies into science, but cutting-edge science makes nonsense of eugenics and “pure” bloodlines. Immigration and genetic exchanges have always defined our species; who we are is a question of culture, not biological inheritance. This revelatory book offers us an entirely new way to understand ourselves, both past and present.
Johannes Krause is a founding director of the Max Planck Institute for the Science of Human History in Jena, Germany, and is now heading the department of archaeogenetics at the Max Planck Institute for Evolutionary Anthropology in Leipzig, Germany, and the Max Planck-Harvard Research Center for the Archaeoscience of the Ancient Mediterranean. His research has been featured in numerous television, radio, print, and online media sources, including The New York Times, The Washington Post, BBC, Discovery Channel, National Geographic, and more.

Thomas Trappe is one of Germany’s leading health journalists. He is the editor in chief at Berlin’s Tagesspiegel, where he covers politics, health policy, and science. Before co-authoring A Short History of Humanity, Trappe had reported on Johannes Krause’s research numerous times, having followed his work for many years.
“A highly readable, personal guide to the twists and turns in unravelling ancient DNA: Krause and Trappe expertly recount the story of archaeogenetics to reveal how this new field has utterly transformed understanding of our deep past.”—Rebecca Wragg Sykes, author of Kindred: Neanderthal Life, Love, Death and Art

“One of those books that stops you dead in your tracks and makes you say out loud: Why didn’t I know that before? So easy to read. So logically argued. So satisfyingly sensible and thought-provoking. Read it, think about it, and then read it again. An absolute revelation.”—Sue Black, author of All That Remains

“A captivating and informative look at the origins and future of humanity. . . . Krause and Trappe make complicated scientific processes accessible to lay readers, and offer hope that the ongoing study of ancient genetics and the development of new technologies such as genome editing will help to fight pathogens.”—Publishers Weekly

“A Short History of Humanity is an eloquent and timely reminder that viruses and other pathogens of infectious disease are merely fellow-travellers in an epic journey that began when the first human migrants left Africa around 200,000 years ago. The solution to pandemics is not to close borders in the hope of keeping viruses out but to recognise that we are a fundamentally peripatetic species united in our shared genetic inheritance and common humanity.”—Mark Honigsbaum, author of The Pandemic Century

“A fascinating story about the ancient history of migrations & the role played by terrible pandemics in our recent evolution. DNA evidence in history can be as powerful as written evidence.”—Richard Dawkins

“A valuable contribution to our understanding of who we are and how we got here.”—Tim Marshall, author of the international bestseller Prisoners of Geography