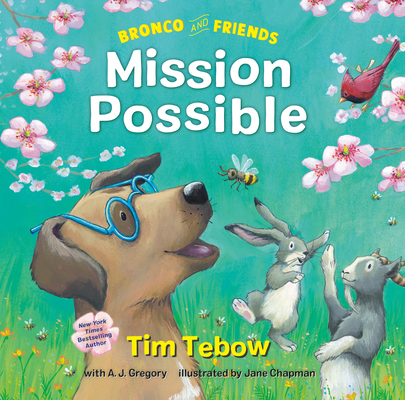 This is book number 2 in the Bronco and Friends series.

In this hilarious and heartwarming adventure from the New York Times bestselling author of Bronco and Friends: A Party to Remember, Bronco learns that when helping others feels hard or scary, God will give you courage to do the right thing.

While having a picnic one day, Bronco gets upset when a bee lands on him. But the bee isn’t as dangerous as she seems. In fact, she needs help! It won’t be easy, but Bronco and his friends gather their courage and work together to embark on a daring rescue. And once they do, they discover that putting others first makes a big difference in the lives of those who really need them.

This book, featuring the same lovable characters as Tim Tebow’s Bronco and Friends: A Party to Remember and illustrations from painter Jane Chapman of the popular “Bear” series, reminds young readers that the God who calls them to help will empower them to do great things for others.
Tim Tebow is a two-time national champion, Heisman Trophy winner, first-round NFL draft pick, and a former professional baseball player. Tebow currently serves as a speaker and a college football analyst with ESPN and the SEC Network, and he is the author of four New York Times bestsellers, including Shaken, This Is the Day, and the children’s book Bronco and Friends: A Party to Remember. He is the founder and leader of the Tim Tebow Foundation (TTF), whose mission is to bring faith, hope, and love to those needing a brighter day in their darkest hour of need. Tim is married to Demi-Leigh Tebow (née Nel-Peters), a speaker, influencer, entrepreneur, and Miss Universe 2017. Tim and Demi live in Jacksonville, Florida, with their three dogs, Chunk, Kobe, and Paris.

Jane Chapman is an award-winning illustrator of more than 100 books for children. She is perhaps best known for her illustrations in Karma Wilson’s “Bear” series of books, which has garnered a string of awards including the Oppenheim Platinum Book Award for Bear Snores On, a New York Times bestseller.