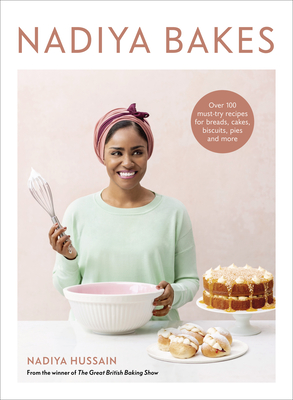 
In Stock—Click for Locations
NEW YORK TIMES BESTSELLER • The host of the beloved Netflix series Time to Eat and Nadiya Bakes and winner of The Great British Baking Show returns to her true love, baking, with more than 100 delicious, Americanized recipes for sweet treats.

When Nadiya Hussain, the UK's "national treasure," began cooking, she headed straight to the oven—which, in her home, wasn't used for baking, but rather for storing frying pans! One day, her new husband asked her to bake him a cake and then . . . she was hooked! Baking soon became a part of her daily life.

In her newest cookbook, based on her Netflix show and BBC series Nadiya Bakes, Nadiya shares more than 100 simple and achievable recipes for cakes, cookies, breads, tarts, and puddings that will become staples in your home. From Raspberry Amaretti Biscuits and Key Lime Cupcakes to Cheat's Sourdough and Spiced Squash Strudel, Nadiya has created an ultimate baking resource for just about every baked good that will entice beginner bakers and experienced pastry makers alike.
Nadiya Hussain wrote Nadiya Bakes as the cookbook companion to her BBC and Netflix series of the same name. She won season six of The Great British Baking Show and lives in the UK with her husband and three children. She is also the author of the cookbook Time to Eat, based on the companion BBC and Netflix series.
“Stunning and scrumptious . . . mouthwatering . . . [an] impressive array of appetizing cakes, tarts and pies, breads, and cookies.”—Publishers Weekly (starred review)

“Delightful . . . it’s a fuzzy feeling that radiates palpably from the pages of Nadiya Bakes. . . . With over 100 recipes that span everything from classic celebration cakes to offbeat lunchbox snacks, it’s something of a manifesto for Hussain’s comprehensive abilities in the kitchen.”—Vogue

“Hussain has a great grasp on spice; those who appreciate balanced sweetness will love the savory notes of molasses and anise in her madeleines.”—Epicurious