Mindreader: The New Science of Deciphering What People Really Think, What They Really Want, and Who They Really Are (Hardcover) 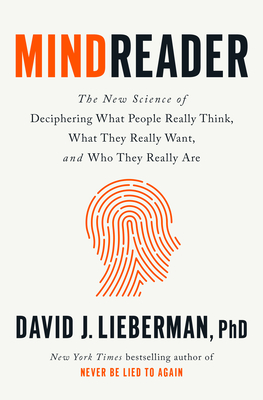 Mindreader: The New Science of Deciphering What People Really Think, What They Really Want, and Who They Really Are (Hardcover)


On Our Shelves Now at:
Tired of guessing what they’re really thinking? Read people in every situation—in person, on a screen, or in writing—using the new science of psycholinguistics, from a New York Times bestselling author and consultant to the FBI, CIA, and NSA.

“A treasure trove of concepts, ideas, and tools that we can all master to be safer and happier. It’s a must-read!”—Joe Navarro, author of Dangerous Personalities

What did your boss mean in that email? Is your mechanic stretching the truth? Whether you’re engaged in a casual conversation or a high-stakes negotiation, it’s critical to understand the subtext of a situation. But with so much interaction happening on screens—via email, texts, or video chat—we are losing the ability to interpret expressions and cues. Furthermore, since many are now savvy about the meaning of body language, it’s become even harder to discern someone’s true thoughts or intentions.

A leading lie-detection expert who instructs the FBI and other security agencies, noted psychotherapist David Lieberman, PhD, takes “people reading” to a whole new level. Drawing on the latest research in psycholinguistics—the cues embedded in spoken and written speech—he shows you how to apply his cutting-edge methods to countless everyday situations, including:

• Detecting the messaging behind passive language, personal or impersonal descriptions, and level of detail.
• Determining whether someone’s account of any incident is the truth or a work of fiction.
• Finding out whether a potential hire, dating app match, or new babysitter is trustworthy or hiding something.

Nobody wants to be played a fool. Mindreader will help us identify who can be trusted, and who may be out to get us.
David J. Lieberman, PhD, is a renowned psychotherapist and the author of eleven books, including the New York Times bestsellers Get Anyone to Do Anything and Never Be Lied to Again. He has trained personnel in the U.S. military, the FBI, the CIA, and the NSA, and his instructional video is mandatory for psychological operations graduates. He teaches government negotiators, mental health professionals, and Fortune 100 executives, and has appeared as a guest on more than 300 television and radio programs, including the Today show, NPR, The Howard Stern Show, and The View.
“The more complicated human interaction becomes in a polarized world, the more essential it is to gain the means to penetrate the fog. Think of this book as your guide.”—Susan Carnicero, former CIA security specialist

“David Lieberman’s command of the nuances of language gives him extraordinarily keen insight into what’s really going on in a person’s head during everyday encounters. In this book he’s melded science and art to forge tools that will give you an enviable advantage over those who may be withholding the truth.”—Phil Houston, former CIA officer and senior member of the Office of Security

“It’s one thing to have proven expertise in a complex field, but quite another to have the skill to share it with a broad audience in an easily comprehensible way. David Lieberman’s remarkable ability to accomplish that is evident on every page of Mindreader.”—Michael Floyd, former officer at both the CIA and NSA

“David Lieberman provides a novel and practical approach to help you distinguish between perception and reality in any and all personal interactions. Mindreader is your key to cultivating healthy emotional intelligence, meaningful relationships, and success at home and the workplace.”—Mitchell Silk, former assistant secretary of the U.S. Department of the Treasury for International Markets

“Perceptive . . . readers will find [Lieberman’s] straightforward explanations logical and reasonable. This accessible pop psychology volume makes for a solid primer on getting into other people’s heads.”—Publishers Weekly