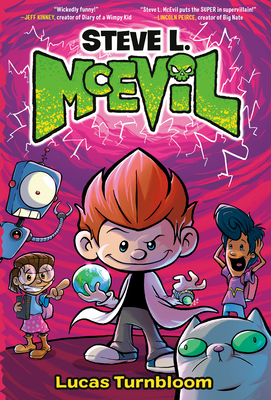 
Not On Our Shelves—Ships in 1-5 Days
Lean into your wicked side in this full-color graphic novel series about a middle-school super villain (in training) who must choose between saving his town and doing the most horrific thing of all--teaming up with the good guys.

Hi! My name is Steve L. McEvil, and I am THE GREATEST SUPERVILLAIN IN THE WORLD! Or…I will be. It’s hard to take over the planet when you still have a bedtime.

Right now, my grandpa Tiberius McEvil is teaching me how to pull off my nefarious schemes. Though lately someone has been doing the job for me. These weird stones have appeared in town. Professor Stinger won’t stop droning on about wormholes. And no one is more villainous than my new neighbor Vic Turry. That guy is just so…NICE! Barf. Even Sierra, who rarely looks up from her geology books, is impressed by his good guy routine. But I’ll show them all. No one can outsmart Steve L. McEvil! (Yeah, yeah, I know it rhymes.)
Lucas Turnbloom is a cartoonist from Southern California. In 2017, he and his wife rescued a sweet yet rambunctious little cat who inspired Lucas to write a comic as an inside joke for his wife. But when his wife insisted he put the comic on the internet, the joke grew, and "How to Cat" now has over 196k followers. In addition to capturing his pet's most feline antics, Lucas is also the illustrator of the Dream Jumper series.
"Kids who love anything relating to superheroes and supervillains will appreciate this funny, fast-paced comic.” –Booklist