On Top of Glass: My Stories as a Queer Girl in Figure Skating (Hardcover) 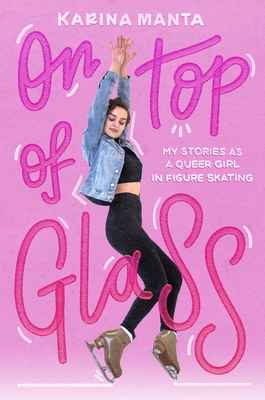 On Top of Glass: My Stories as a Queer Girl in Figure Skating (Hardcover)


Special Order—Subject to Availability
An insightful memoir from a figure skating champion about her life as a bisexual professional athlete, perfect for readers of Fierce by Aly Raisman and Forward by Abby Wambach.

Karina Manta has had a busy few years: Not only did she capture the hearts of many with her fan-favorite performance at the U.S. Figure Skating Championships, she also became the first female figure skater on Team USA to come out as queer. Her Modern Love essay "I Can't Hate My Body if I Love Hers" was published in the New York Times, and then she joined the circus--Cirque du Soleil's on-ice show, AXEL.

Karina's memoir covers these experiences and much more. Attending a high school with 4,000 students, you'd expect to know more than two openly gay students, but Karina didn't meet an out-lesbian until she was nearly seventeen--let alone any other kind of queer woman. But this isn't just a story about her queerness. It's also a story about her struggle with body image in a sport that prizes delicate femininity. It's a story about panic attacks, and first crushes, and all the crushes that followed, and it's a story about growing up, feeling different than everybody around her and then realizing that everyone else felt different too.
Karina Manta was born in Olympia, Washington, but she grew up in the sunshine of Chandler, Arizona. At 16 she moved to Colorado Springs to become an elite figure skater. Despite her distaste for the cold, she kept figure skating and living in Colorado, eventually competing for Team USA. She currently works as a performer for Cirque Du Soleil. She enjoys eating ice cream, engaging with creative approaches to activism, and being bisexual. Follow her on Twitter @KarinaMantras and on Instagram at @KarinaManta.
"Resolute and hopeful, this memoir swells with emotion. Raw, kind, and close to the heart."--Kirkus

"Manta’s talent as a writer is obvious throughout. Particularly impressive is the gentleness and clarity with which the author approaches her younger self and past mistakes."--School Library Journal

"Manta strives to reach readers who share her struggles. Her openness in admitting her flaws and her need for control and reassurance will endear her to readers who’ll find her relatability immensely appealing."--Booklist