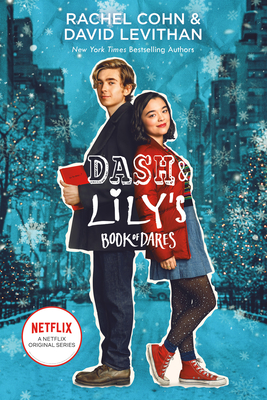 This is book number 1 in the Dash & Lily Series series.

Lily left a red notebook full of challenges on her favorite bookstore shelf, waiting for just the right guy to come along and accept its dares. Dash, in a bad mood during the holidays, happens to be the first guy to pick up the notebook and rise to its challenges. What follows is a whirlwind romance as Dash and Lily trade dares, dreams, and desires in the notebook they pass back and forth at locations all across New York City. But can their in-person selves possibly connect as well as their notebook versions, or will their scavenger hunt end in a comic mismatch of disastrous proportions?
Rachel Cohn is the author of critically acclaimed YA novels Very LeFreak, You Know Where to Find Me, Cupcake, Shrimp, Gingerbread, and Beta. A graduate of Barnard College, she lives and writes in Los Angeles.

When not writing during spare hours on weekends, David Levithan is editorial director at Scholastic and the founding editor of the PUSH imprint, which is devoted to finding new voices and new authors in teen literature. His acclaimed novels Boy Meets Boy and The Realm of Possibility started as stories he wrote for his friends for Valentine's Day (something he's done for the past 22 years and counting) that turned themselves into teen novels. He's often asked if the book is a work of fantasy or a work of reality, and the answer is right down the middle—it's about where we're going, and where we should be.