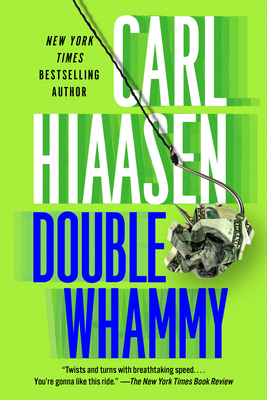 
In Stock—Click for Locations
"Follow the adventures of a news-photographer-turned-private-eye as he seeks truth, justice, and an affair with his ex-wife" (The New York Times) in this hilarious caper from bestselling author Carl Hiaasen.

R. J. Decker, star tenant of the local trailer park and neophyte private eye, is fishing for a killer. Thanks to a sportsman's scam that's anything but sportsmanlike, there's a body floating in Coon Bog, Florida--and a lot that's rotten in the murky waters of big-stakes, large-mouth bass tournaments. Here Decker will team up with a half-blind, half-mad hermit with an appetite for road kill; dare to kiss his ex-wife while she's in bed with her new husband; and face deadly TV evangelists, dangerously seductive women, and a pistol-toting redneck with a pit bull on his arm. And here his own life becomes part of the stakes. For while the "double whammy" is the lure, first prize is for the most ingenious murder.
Carl Hiaasen was born and raised in Florida. He is the New York Times bestselling author of fifteen novels, including Razor Girl, Bad Monkey, Star Island, Nature Girl, Skinny Dip, Sick Puppy, Lucky You, Skin Tight, and Tourist Season, as well as the bestselling children's books Squirm, Hoot, Flush, Scat, Chomp, and Skink. His most recent work of nonfiction is Assume the Worst, a collaboration with the artist Roz Chast.
Praise for Double Whammy

“A raucous, mordant whopper of a fish story with more weird and bloodthirsty creatures above the water than in it.”—Los Angeles Times

“A day-glo version of reality that is insanely funny—and scary.”—Boston Herald

“Twists and turns with breathtaking speed...Climb aboard, Bubba, strap yourself in. You’re gonna like this ride.”—The New York Times Book Review

“Carl Hiaasen’s vivid imagination serves up a seven-course meal in Double Whammy. It’s a spread where every course is thick, rare, red meat...You’ll have a good time.”—Houston Post

“A stewpot full of the strange, the wacky, the interesting, and the bizarre...zany, diverting, marvelously grotesque.”—Newsday

“A savagely funny crime adventure...bristles all over with Swiftian wit...For all its loony-tunes characters and their mondo-bizarro adventure, there’s something about this mordant, comic fantasy that says it’s just too crazy not to be true.”—Miami Herald