Hounded: Book One of The Iron Druid Chronicles (Paperback) 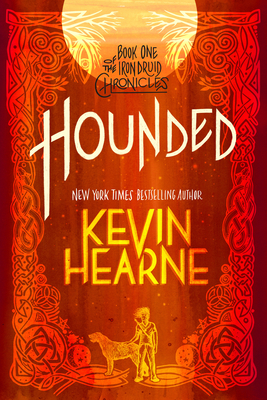 Hounded: Book One of The Iron Druid Chronicles (Paperback)

This is book number 1 in the The Iron Druid Chronicles series.

Atticus O’Sullivan is the last of the ancient druids. He has been on the run for more than two thousand years and he’s tired of it. The Irish gods who want to kill him are after an enchanted sword he stole in a first-century battle, and when they find him managing an occult bookshop in Tempe, Arizona, Atticus doesn’t want to uproot his life again. He just wants everything to end one way or another, but preferably the way in which he can continue to enjoy fish and chips.

He does have some small hope of survival: The Morrigan, the Irish Chooser of the Slain, is on his side, and so is Brighid, First Among the Fae. His lawyer is literally a bloodsucking vampire, and he has a loyal Irish wolfhound with opinions about poodles.

But he’s facing down some mighty enemies: Aenghus Óg, a vengeful Irish god, plus a coven of witches and even the local police. On top of all that, Aenghus has a direct line to the firepower of hell. Atticus will need all the luck of the Irish and more if he’s going to stay alive.