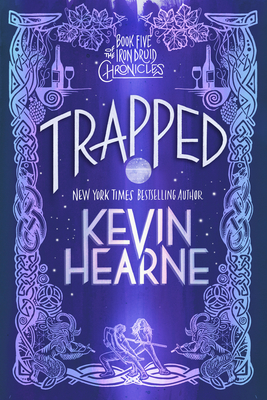 This is book number 5 in the The Iron Druid Chronicles series.

In the fifth novel in the New York Times bestselling Iron Druid Chronicles, two-thousand-year-old Druid Atticus O’Sullivan will at last bind a new Druid to protect the earth—but first he must go toe-to-toe with the Roman god Bacchus, the Norse pantheon, and an ancient vampire, all hell-bent on ensuring his demise.

The downside to faking your own death is that people tend to get upset when they find out they’ve been had. In Atticus O’Sullivan’s case, they’re upset enough to come after him to make sure he dies for real this time. Yet he can’t remain in hiding anymore: He has to bind his apprentice, Granuaile, to the earth so that she can become the first new Druid in centuries.

But the Roman god Bacchus wants mortal revenge for a slight against him, and he proceeds to act on the principle that Atticus should hate his life until it can be ended. Members of the Norse pantheon aren’t particularly pleased with Atticus either—especially one who had languished in darkness, slowly going mad, and is now free to work his mischief again.

On top of that, an ancient vampire, who’d like to remove Atticus and Granuaile as threats to his kind, is working on his own plan for their destruction.

Forced to work at the base of Mount Olympus, Atticus and Granuaile must survive the three-month process of her binding and escape the many traps set for them. It’s fortunate that they have Oberon the Irish Wolfhound on their side—but is one good dog going to be enough to see them through it?