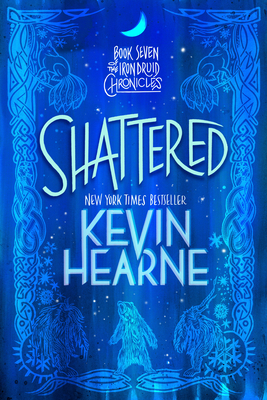 This is book number 7 in the The Iron Druid Chronicles series.

NEW YORK TIMES BESTSELLER • In the seventh book in The Iron Druid Chronicles, two-thousand-year-old Druid Atticus O’Sullivan and his apprentice Granuaile take on an ancient plague-summoning demon and confront a rebellion of the Fae in Tír na nóg.

Atticus’s apprentice Granuaile is at last a full Druid herself. What’s more, Atticus has defrosted an archdruid frozen in time long ago, a father figure (of sorts) who now goes by the modern equivalent of his old Irish name: Owen Kennedy.

And Owen has some catching up to do.

Atticus takes pleasure in the role reversal, as the student is now the teacher. Between busting Atticus’s chops and trying to fathom a cell phone, Owen must also learn English. For Atticus, the jury’s still out on whether the wily old coot will be an asset in the epic battle with the

Norse god Loki—or merely a pain in the arse. But Atticus isn’t the only one with daddy issues. Granuaile faces a great challenge: to exorcise a sorcerer’s spirit that is possessing her father in India. Even with the help of the witch Laksha, Granuaile may be facing a crushing defeat.

As the trio of Druids deals with pestilence-spreading demons, bacon-loving yeti, fierce flying foxes, and frenzied Fae, they’re hoping that this time, three’s a charm.

“Uproariously entertaining in a way that [Kevin] Hearne is uniquely able to achieve . . . [Shattered] has the feeling of a new beginning for its hero and for the series.”—RT Book Reviews

“This series just gets bigger and better, and Shattered shows no signs of it slowing down.”—Vampire Book Club