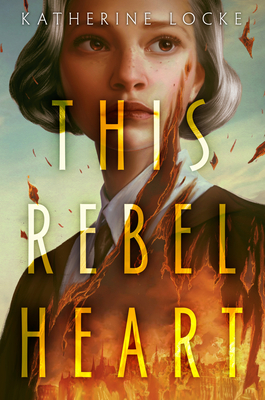 
On Our Shelves Now at:
A tumultuous tale of the student-led 1956 Hungarian revolution—and an all too timely look at the impact of Communism and the USSR in Eastern Europe—set in a fabulist, colorless post-WWII Budapest from Sydney Taylor Honor winner Katherine Locke.

In the middle of Budapest, there is a river. Csilla knows the river is magic. During WWII, the river kept her family safe when they needed it most--safe from the Holocaust. But that was before the Communists seized power. Before her parents were murdered by the Soviet police. Before Csilla knew things about her father's legacy that she wishes she could forget.

Now Csilla keeps her head down, planning her escape from this country that has never loved her the way she loves it. But her carefully laid plans fall to pieces when her parents are unexpectedly, publicly exonerated. As the protests in other countries spur talk of a larger revolution in Hungary, Csilla must decide if she believes in the promise and magic of her deeply flawed country enough to risk her life to help save it, or if she should let it burn to the ground.

With queer representation, fabulist elements, and a pivotal but little-known historical moment, This Rebel Heart is Katherine Locke's tour de force.
Katherine Locke (they/them) is the author of The Girl with the Red Balloon, a 2018 Sydney Taylor Honor Book and 2018 Carolyn W. Field Honor Book, as well as The Spy with the Red Balloon. They are the co-editor and contributor to It's A Whole Spiel: Love, Latkes and Other Jewish Stories, a contributor to Unbroken: 13 Stories Starring Disabled Teens and Out Now: Queer We Go Again, and co-editor of This Is Our Rainbow: 16 Stories of Her, Him, Them, and Us. They are also the author of the picture books Bedtime for Superheroes and How to Be Friends with a Dragon. They can be found online at KatherineLockeBooks.com and @bibliogato on Twitter and Instagram.
★ "Vivid, suspenseful, emotionally grounded, and heartbreaking... essential reading for lovers of historical fiction." —SLJ, starred review

★ "A breathtaking, affecting work…. The queer characters, gentle three-way romance and passionate socio-political activism in This Rebel Heart are likely to strike a recognizable chord for teens of any era." —Shelf Awareness, starred review

★ "Like Sepetys’ The Fountains of Silence, this will certainly send readers to research a lesser-known resistance movement and realize that while it’s easy to judge history in hindsight, it’s far more difficult, but necessary, to try to make it." —The Bulletin, starred review

“With its richly drawn characters and gutting depictions of post-Holocaust trauma and antisemitism, This Rebel Heart is a grounded, often heartbreaking account of Jewish life under Russian occupation." —Polygon

"Katherine Locke isn’t a household name—yet. This Rebel Heart could very well be the book to change that." —BookPage

"Locke offers an original, moving tribute to the bravery of freedom fighters—straight and queer, Jewish and gentile—who risked their lives for their cause." —Publishers Weekly