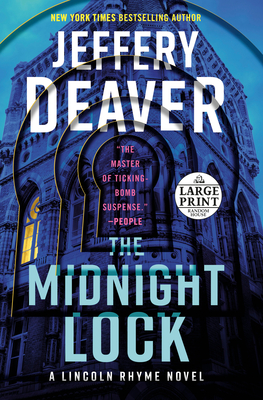 This is book number 15 in the Lincoln Rhyme Novel series.

The "master of ticking-bomb suspense" Jeffery Deaver brings us a mash-up that will thrill new readers and old fans alike: His beloved protagonists Lincoln Rhyme and Amelia Sachs team up with "reward seeker" Colter Shaw as they search for a killer whose fascination with breaking locks terrorizes New York City.

When a woman arrives home to her Manhattan apartment to find that her personal items have been rearranged while she slept, police initially dismiss her complaint. Nothing was stolen, and there's no sign of breaking and entering. But when the same woman turns up dead, Lincoln Rhyme and Amelia Sachs are brought in to investigate the murder. The soon learn that the murderer calls himself "the Locksmith." He is obsessed with locks, slipping into homes in the dead of night and tying his victims up with knots or locks, ultimately strangling them.

Their hunt for the killer is interrupted when an internal investigation in the police force uncovers what seems to be a crucial mistake in one of Rhyme's previous cases. He is removed from the case, and must investigate the Locksmith in secret--with the help of Sachs and their new ally, Colter Shaw. The three work to untangle the mysteries behind the psychotic killer before he can set his ultimate trap.
Jeffery Deaver is the #1 international bestselling author of more than forty novels, three collections of short stories, and a nonfiction law book. His books are sold in 150 countries and translated into 25 languages. His first novel featuring Lincoln Rhyme, The Bone Collector, was made into a major motion picture starring Denzel Washington and Angelina Jolie. He's received or been shortlisted for a number of awards around the world, including Novel of the Year by the International Thriller Writers and the Steel Dagger from the Crime Writers' Association in the United Kingdom. In 2014, he was the recipient of three lifetime achievement awards. A former journalist, folksinger, and attorney, he was born outside of Chicago and has a bachelor of journalism degree from the University of Missouri and a law degree from Fordham University.