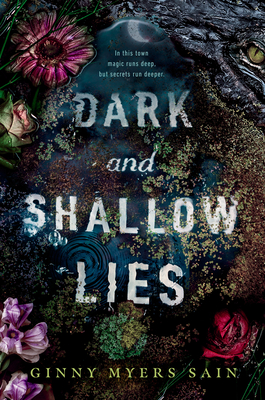 
Not On Our Shelves—Ships in 1-5 Days
"A totally engrossing small-town mystery about what happens when you finally dig up long-buried secrets.” —Jessica Goodman, New York Times bestselling author of They'll Never Catch Us

A teen girl disappears from her small town deep in the bayou, where magic festers beneath the surface of the swamp like water rot, in this chilling supernatural thriller for fans of Natasha Preston, Karen McManus, and E. Lockhart.

La Cachette, Louisiana, is the worst place to be if you have something to hide.

This tiny town, where seventeen-year-old Grey spends her summers, is the self-proclaimed Psychic Capital of the World—and the place where Elora Pellerin, Grey's best friend, disappeared six months earlier.

Grey can't believe that Elora vanished into thin air any more than she can believe that nobody in a town full of psychics knows what happened. But as she digs into the night that Elora went missing, she begins to realize that everybody in town is hiding something—her grandmother Honey; her childhood crush Hart; and even her late mother, whose secrets continue to call to Grey from beyond the grave.

When a mysterious stranger emerges from the bayou—a stormy-eyed boy with links to Elora and the town's bloody history—Grey realizes that La Cachette's past is far more present and dangerous than she'd ever understood. Suddenly, she doesn't know who she can trust. In a town where secrets lurk just below the surface, and where a murderer is on the loose, nobody can be presumed innocent—and La Cachette's dark and shallow lies may just rip the town apart.
Ginny Myers Sain lives in Tulsa, Oklahoma, and has spent the past twenty years working closely with teens as a director and acting instructor in a program designed for high school students seriously intent on pursuing a career in the professional theatre. Having grown up in deeply rural America, she is interested in telling stories about resilient kids who come of age in remote settings. She is also the author of Secrets So Deep. Follow her on Twitter @stageandpage and on Instagram @ginnymyerssain, or find her on her website at ginnymyerssain.com
* “Dreamy prose conjures a mythical Southern Gothic atmosphere, mixing violence with a Byronic characterization of Elora’s stepbrother Hart. Taut pacing builds sustained terror on the page with each successive suspect in this formidable debut.” —Publishers Weekly, starred review

"A darkly atmospheric mystery set in the bayous of Louisiana."— School Library Journal

“Haunting and arresting, this is one stunning debut. Ginny Myers Sain has written a totally engrossing small-town mystery about what happens when you finally dig up long-buried secrets.” —Jessica Goodman, New York Times bestselling author of They'll Never Catch Us

“Don’t even try to resist—Ginny Myers Sain will lure you into the spellbinding world of the deep Louisiana bayou with this riveting missing girl mystery populated by a bewitching cast of characters; spun to life in lush, atmospheric prose; and teeming with a dark mythology that is part folklore, part psychic mysticism, and entirely compelling.” —Kit Frick, author of I Killed Zoe Spanos

“Enchanting and chilling at once, you’ll instantly get sucked into this atmospheric tale of kindred spirits brimming with secrets that could tear them apart. Ginny Myers Sain’s haunting, lush, lyrical prose will keep you captivated till the end.” —Diana Urban, author of All Your Twisted Secrets