A Seed in the Sun (Hardcover) 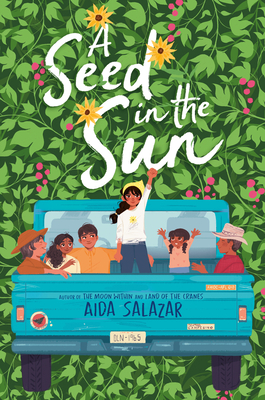 A Seed in the Sun (Hardcover)


On Our Shelves Now at:
**Four starred reviews!**

A farm-working girl with big dreams meets activist Dolores Huerta and joins the 1965 protest for workers’ rights in this tender-hearted novel in verse, perfect for fans of Rita Williams-Garcia and Pam Muñoz Ryan.

Lula Viramontes aches to one day become someone whom no one can ignore: a daring ringleader in a Mexican traveling circus. But between working the grape harvest in Delano, California, with her older siblings under dangerous conditions; taking care of her younger siblings and Mamá, who has mysteriously fallen ill; and doing everything she can to avoid Papá’s volatile temper, it’s hard to hold on to those dreams.

Then she meets Dolores Huerta, Larry Itliong, and other labor rights activists and realizes she may need to raise her voice sooner rather than later: Farmworkers are striking for better treatment and wages, and whether Lula’s family joins them or not will determine their future.
Aida Salazar is an award-winning author and arts activist whose writings for adults and children explore issues of identity and social justice. She is the author of the critically acclaimed middle grade verse novels The Moon Within and Land of the Cranes, as well as the picture book anthology In the Spirit of a Dream: 13 Stories of American  Immigrants of Color. Aida is a founding member of Las Musas—a Latinx kidlit debut author collective. She lives with her family of artists in a teal house in Oakland, CA.
Praise for A Seed in the Sun

★ “Poignantly told, the story of Lula and her family’s plight will tug young readers’ heartstrings; this is an important, and sometimes unspoken, part of the American past and present that needs to be brought to light.”—School Library Journal, starred review

★ “There is a special power in historical fiction’s ability to blend real issues and events with engaging characters, turning the past into a living, breathing thing. Salazar accomplishes this beautifully in her new novel in verse . . . Led by a memorable protagonist, this novel mixes themes of growth and change with historical details and powerful observations on the abuses that sparked the Farmworkers’ Movement and the strength of those demanding justice.”—Booklist, starred review

“[An] introspective novel with a well-developed sense of place . . . The character development is strong . . . Lula shows tenacity as her seeds of potential are nourished. Compelling and atmospheric.”—Kirkus Reviews