A Gift for Nana (Hardcover) 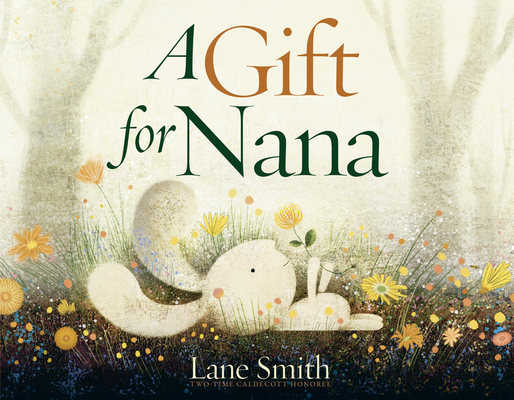 A Gift for Nana (Hardcover)

“A Gift for Nana is the SWEETEST book. Rabbit is on a quest for the perfect gift for Nana; along the way he meets a cast of quirky characters. A story full of cute illustrations sure to charm children, and wry asides to make grown-ups laugh.”
— Shoshana Smith, Flashlight Books, Walnut Creek, CA

Two-time Caldecott Honor author/illustrator Lane Smith tells a whimsical story about a little rabbit searching for the best gift for someone very special.

A thoughtful little Rabbit sets out to find the perfect gift for his Nana. He knows she will love anything he brings her but Rabbit wants this gift to be extra special. As he travels on his quest, Rabbit encounters an assortment of creatures-a crow, a smiling full moon, a stickler (whatever that is), a big fish, and a volcano. Each is certain they offer the best advice but nothing they suggest seems right for his Nana. It's not until Rabbit reaches the highest peak, that he finds exactly what he's been searching for.

The award -winning illustrator of bestsellers including Penguin Problems and Giraffe Problems, brings originality and gentle humor to a story that parents and grandparents will be sharing with their children for years to come.
Lane Smith is the author/illustrator of several award-winning and bestselling books for children. Five of his titles have won the New York Times Best Illustrated Book Award. He is the illustrator of Penguin Problems, Giraffe Problems, and Cat Problems, all by Jory John. Lane Smith lives in Connecticut with his wife Molly Leach, an award-winning graphic designer. Find out more at lanesmithbooks.com
★ "A cozy story that will transport readers to faraway places." —Kirkus Reviews, starred review