Amistad: The Story of a Slave Ship (Step into Reading) (Paperback) 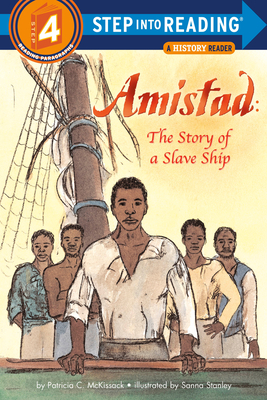 Amistad: The Story of a Slave Ship (Step into Reading) (Paperback)


In Stock—Click for Locations
An amazing chapter in American history is now available in Step into Reading, the premier leveled reader line.

In 1838, a slave ship named the Amistad took hundreds of kidnapped Africans on a long journey across the Atlantic. But the brave captives would not give up their freedom, taking over the ship so they could sail back to their homeland. This History Reader is not to be missed.

Step 4 Readers use challenging vocabulary and short paragraphs to tell exciting stories. For newly independent readers who read simple sentences with confidence.
PATRICIA C. MCKISSACK was the author of many lauded books for children, including, The Dark-Thirty: Southern Tales of the Supernatural, a Newbery Honor Book and Coretta Scott King Award winner, and its companion, Porch Lies: Tales of Slicksters, Tricksters, and other Wily Characters, an ALA-ALSC Notable Children's Book; Never Forgotten, a Corretta Scott King Honor book; and The All-I'll-Ever-Want Christmas Doll, an ALA-ALSC Notable Children's Book and winner of the 2008 Parents Choice Award. Ms. McKissack passed away in the summer of 2017.

Sanna Stanley spent many years in her youth living in what was, at the time, considered the Belgian Congo. She was deeply influenced by living in the bush, and enjoys depicting village life in her art.