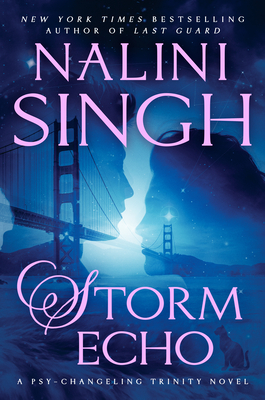 This is book number 6 in the Psy-Changeling Trinity series.

New York Times bestselling author Nalini Singh takes us into the hearts of two fractured people in a world on the brink of a psychic Armageddon . . .

Silence has fallen. The Psy are free to feel emotion. Free to love. But Silence was never a prison for Ivan Mercant. The biggest threat to his future lies dormant in his brain—a psychic monster that wants only to feed. And now, the brutal leash he’s kept on that monster is slipping. He prepared for this day, for the end of Ivan Mercant . . . but that was before he met Lei.

As primal as she is human, this wild changeling brings color into his life, laughter to his soul. Then the dream shatters in a rain of blood, in silent bodies in the snow. Lei is gone. Vanished without a trace . . . until he meets strangely familiar eyes across a busy San Francisco street.

Soleil Bijoux Garcia is a healer who has lost everything. She exists in a world of desolate aloneness . . . till the day she finds herself face-to-face with a lethal stranger. The animal who is her other half knows this man, but her memories are tattered fragments. Sorrow and a need for vengeance are all that drive her. Her mission? To kill the alpha of the DarkRiver leopard pack.

But fate has other plans. Soon, a deadly soldier who believes himself a monster and a broken healer might be all that stand between life and death for the entire Psy race. . . .
New York Times bestselling author Nalini Singh is passionate about writing. Though she’s traveled as far afield as the deserts of China, the temples of Japan, and the frozen landscapes of Antarctica, it is the journey of the imagination that fascinates her most. She’s beyond delighted to be able to follow her dream as a writer.

She is the author of the Guild Hunter series, including Archangel’s Sun, Archangel’s War, and Archangel’s Prophecy. She is also the author of the Psy-Changeling novels, including Last Guard, Alpha Night, and Wolf Rain, and stand-alone novels A Madness of Sunshine and Quiet in Her Bones.
“I dare you not to fall in love with these two protective souls… Nalini Singh is in top form in this thrilling, romantic tale!”—Wit and Si