The Sky's the Limit! (Minecraft) (Step into Reading) (Paperback) 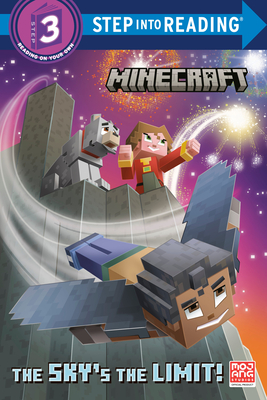 The Sky's the Limit! (Minecraft) (Step into Reading) (Paperback)


Not On Our Shelves—Ships in 1-5 Days
Emmy and Birch go an adventure so they can take to the sky with this Step into Reading Step 3 Leveled Reader and the only official leveled reader series based on Minecraft, the world's best-selling video game!

Minecraft® is the best-selling video game of all time! And now learning to read has never been more fun for fans ages 4 to 7. They’ll get a great introduction to the game through the adventures of two young players, Emmy and Birch—and their tame wolf Byte—who are new to the world of Minecraft but always ready to explore. This time, Birch wants to go flying more than anything. Emmy has an idea for getting the right materials but it is going to be an incredible journey.

Step 3 readers feature engaging characters in easy-to-follow plots about popular topics for children who are ready to read on their own.


© 2023 Mojang AB. All Rights Reserved. Minecraft, the Minecraft logo, the Mojang Studios logo and the Creeper logo are trademarks of the Microsoft group of companies.
Nick Eliopulos is a professional writer, editor, game designer, and teacher. (He likes to keep busy.) He is the author of two officially licensed Minecraft chapter book series, the Woodsword Chronicles, and the Stonesword Saga, as well as the co-author of the Adventurers Guild trilogy. Nick was born in Florida, lives in Brooklyn, and spends most of his free time in the Nether.


Established in July 2013 in a merger between Penguin and Random House, Penguin Random House, with nearly 250 independent imprints and brands on five continents, more than 15,000 new titles published each year, and close to 800 million print, audio, and eBooks sold annually, is the world’s leading trade book publisher. Like its predecessor companies, Penguin Random House is committed to publishing adult and children’s fiction and nonfiction print editions and is a pioneer in digital publishing. Its publishing lists include more than 60 Nobel Prize laureates and hundreds of the world’s most widely read authors.
“A sure pick for Minecraft enthusiasts who may need a way in to reading practice and peer connections.” —School Library Journal