Amazing: Asian Americans and Pacific Islanders Who Inspire Us All (Hardcover) 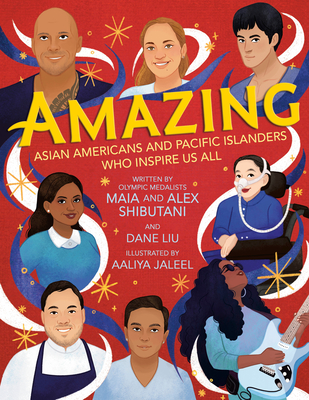 Amazing: Asian Americans and Pacific Islanders Who Inspire Us All (Hardcover)


Coming Soon—Pre-Order Now
From Olympic medalists Alex and Maia Shibutani, this beautifully illustrated picture book highlights the achievements of many Asian Americans and Pacific Islanders who have made invaluable contributions to the world.

Olympic medalist siblings Maia and Alex Shibutani felt compelled to create a book showing the undeniably positive impacts that Pacific Islanders and Asian Americans have made in this country and around the world. Thanks to quick and accessible biographies written with journalist Dane Liu, readers will learn about important figures who have shaped life-altering policy, made indelible marks on pop culture, and achieved their greatest dreams—paving the way for future generations to make lasting change.
Maia and Alex Shibutani (aka the ShibSibs) are two-time Olympic bronze medalists, three-time world medalists, and two-time US National Champions. They made history when they became the first figure skaters of Asian descent to win medals at the Olympics in ice dance. Off the ice, the ShibSibs are producers, speakers, and ambassadors for various organizations. They recently began their writing career with the Kudo Kids middle grade series. Amazing is their first picture book. Find Maia and Alex on Twitter and Instagram: @MaiaShibutani, @AlexShibutani, and @ShibSibs.

Dane Liu was born in China and moved to the US as a tween. She received her BA from the University of Toronto and her MS in journalism from Columbia University. Her debut children's book, Friends Are Friends, Forever, is a JLG Gold Standard Selection, an Indie Next Pick, and a Best Book of the Year (BCCB). She has been awarded by the Pulitzer Center on Crisis Reporting and is an Oregon Literary Career Fellow. Follow her on Twitter and Instagram: @DaneLiuWrites.

Aaliya Jaleel is a Sri-Lankan American based in Dallas, Texas, who loves illustrating bold, bright color palettes and memorable characters. She is also a designer for animation. Visit her at AaliyaMJ.com and on Twitter and Instagram: @Aaliyamj.