Cook It Up: Bold Moves for Family Foods: A Cookbook (Hardcover) 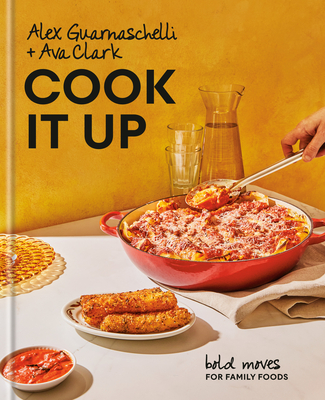 Cook It Up: Bold Moves for Family Foods: A Cookbook (Hardcover)


Not Yet Published—Pre-Order Now
75 family favorites get leveled up to be even bolder, saucier, cheesier, and crisper thanks to Iron Chef Alex Guarnaschelli and her highly opinionated chef-in-training daughter Ava!

From the time she was old enough to hold a fork, Ava has been at Alex’s side in the kitchen, whether eating lusciously cheesy gnocchi at Alex’s New York City restaurant, Butter, or making classic French omelets with her famous Iron Chef mom. While Alex turns to treasured cookbooks for inspiration, Ava scrolls through TikTok—and now as a teenager, Ava is teaching Alex a thing or two.

Through seventy-five witty and informative recipes, Alex and Ava share a repertoire of dishes that define their modern family meals: bold flavored, comforting, satisfying, and always supremely delicious. Side by side, they cook their way through family favorites like Blueberry Pie from Alex’s mom, a legendary cookbook editor, and Nanny Ida’s Crisp Potato Latkes. Tips and notes offer great cooking advice for achieving the fluffiest frittatas (add water, never milk) and how to season and mix meatballs so they always stay juicy (spread the mixture up around the sides of the bowl and then season). There’s even a bonus recipe for dog biscuits, inspired by Alex and Ava’s family dog, Leon!

Cooking with authority is learned and earned in this smart and joyous cookbook that celebrates a mother-daughter bond that’s stronger than the even the most garlicky garlic bread (the secret is​—surprise—lots of shallots!).
Alex Guarnaschelli is the host of Alex vs. America and is one of the stars of The Kitchen, both on Food Network. She is also a judge on Chopped and Beat Bobby Flay, and is one of three women chefs who have earned the Iron Chef title on Iron Chef America. She has been the executive chef at Butter in New York City since 2003 and lives in the city with her teenage daughter, Ava Clark.