Celebrate the Day of the Dead! (Board book) 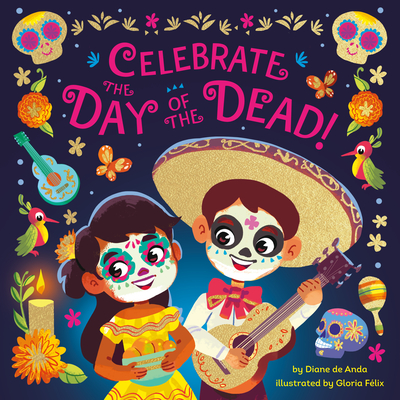 Celebrate the Day of the Dead! (Board book)


Coming Soon—Pre-Order Now
El Día de los Muertos, or the Day of the Dead, is here--and this board book is the perfect format to introduce the youngest readers to the holiday!

Cristina is excited to celebrate Día de los Muertos with her brother, Carlos, and their family. Young readers can follow along as everyone gets ready to remember their loved ones who are no longer with them.

Vibrant illustrations will express the festive, yet poignant, spirit of the celebration as everyone decorates their home, dresses up for a costume parade, decorates an altar, cooks tamales and sweet treats, and much more. At the end, there are additional facts about Día de los Muertos to reinforce the significance of all the traditions depicted in the book.
Diane de Anda, a third-generation Latina, grew up in Los Angeles. She became a teacher, first of children and teens, and ultimately, a professor of social welfare at UCLA. Soon Diane began writing stories from the tales told to her by her great-grandparents and grandmother about their experiences during the Mexican Revolution and beyond. Realizing the need for children’s books in which Latino children could see themselves and their families, she also began to write books where they were the main characters. Diane is the author of several picture books, including Mango Moon, 21 Cousins, and The Day Abuela Got Lost.

Gloria Felix is a professional background artist from Mexico. She has been a background designer and background painter for animation and holds a BFA in 3D animation from Tecnológico de Monterrey and an MFA in visual development from Academy of Art University in San Francisco. Clients include Pixar, Capstone, Valve, HBS Games, DeviantArt, and Google HOLA. Besides working as a visual development artist and illustrator, Gloria likes to spend her time painting in traditional mediums and plein air painting.