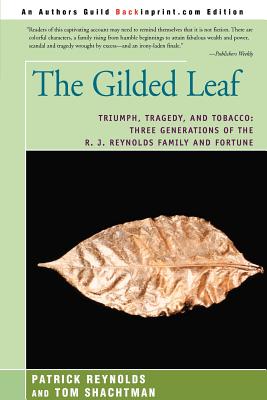 By Patrick Reynolds, Tom Shachtman (With)


Not On Our Shelves—Ships in 1-5 Days
(This book cannot be returned.)
The Gilded Leaf is the riveting, dramatic saga of the R. J. Reynolds tobacco family, one of America's richest and most intensely private clans. R.J. was the original founder of the company that became part of RJR Nabisco, which in 1988 was involved in the largest business takeover in history. Spanning three generations, the Reynolds's story moves from the triumphs of founder and corporate genius R. J. to the dissipation, scandal, and tragedy that plagued his children and grandchildren. There is a redemptive close, with grandson Patrick Reynolds founding Smokefree America and becoming a leading anti-smoking advocate.

The Gilded Leaf presents, for the first time, a complete account of the family who captured, spent and redeemed the American dream.