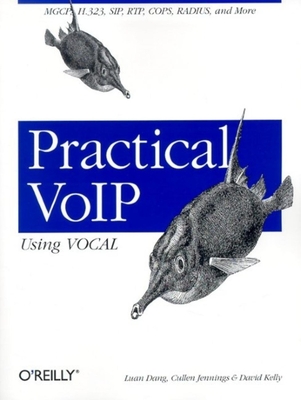 While many books describe the theory behind Voice over IP, only Practical VoIP Using VOCAL describes how such a phone system was actually built, and how you too can acquire the source code, install it onto a system, connect phones, and make calls.

VOCAL (the Vovida Open Communication Application Library) is an open source software project that provides call control, routing, media, policy, billing information and provisioning on a system that can range from a single box in a lab with a few test phones to a large, multi-host carrier grade network supporting hundreds of thousands of users. VOCAL is freely available from the Cisco Systems-sponsored Vovida.org community web site (www.vovida.org).

A Silicon Valley start-up called Vovida Networks, Inc (think of VOice, VIdeo, DAta) created VOCAL and invested over one hundred man years into its development. Since Cisco acquired Vovida in 2000, individuals representing every significant telecom company and service provider in the world have downloaded the source code. Today, more and more people are successfully building VOCAL into professional solutions, while contributing fixes and new functionality back to Vovida.org.

Because VOCAL is open source, you can look under the hood to the base code and protocol stack levels and discover not only how the system works, but also how common problems are being worked out in the development environment. We're hoping that you will be inspired to take this system to another level by implementing a feature or functionality that no one has thought of before.

If you're interested in VoIP, this is the only book available that focuses on the real issues facing programmers and administrators who need to work with these technologies.

Cullen Jennings is the Manager of Software Development in the Voice Architecture Group at Cisco Systems. Previously, he was vice president of engineering for Vovida Networks. His background includes management, consulting, and development both for technology-based companies and for educational institutions. Cullen is a member of the IEEE and ACM and has published numerous technical articles.Luan Dang is Director of Software Development at Cisco Systems. Previously, Luan was Senior Vice President, Chief Technology Officer and Co-Founder of Vovida Networks. Luan is currently a member of the Technical Advisory Council for the International Softswitch Consortium and has previously filed telephony patents for voice-over-IP (1999) and caller IP (1998). Luan has also been granted a patent for the display screen management apparatus in 2000.