Internet Annoyances: How to Fix the Most Annoying Things about Going Online (Paperback) 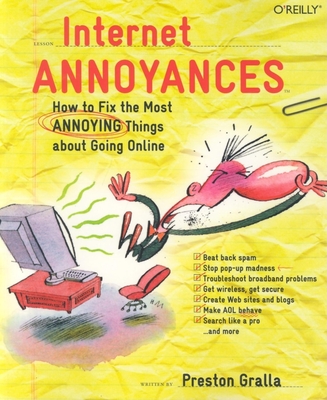 Internet Annoyances: How to Fix the Most Annoying Things about Going Online (Paperback)

What began as an intrepid U.S. Government initiative in the early 1970's has turned into a global way of life. Indeed, with more than 500 million current users (and counting), the Internet has revolutionized the way societies function the world over. From dating and shopping online, to conducting informational research, to communicating via email, today seemingly everyone uses the Internet for one purpose or another. How, then, can something so vast and powerful be defiled by something as trivial as spam?It's true. The fact remains that despite the leading-edge technological sophistication fueling the Net, there are still many related annoyances that complicate and tarnish the Internet experience. And it doesn't matter if you're a homemaker in search of a fresh chicken recipe, or a civil engineer researching plans for a new skyscraper, the problems are the same.Internet Annoyances understands the universal nature of the Internet and strives to make its use as stress-free as possible. This insightful guide shows you how to overcome the most annoying Internet-related quirks, bugs, and hassles. You'll learn how to make a seamless connection, thwart would-be hackers, ensure greater security while surfing, eliminate pop-up ads, maximize online services, conduct more effective Google searches, better utilize digital media (music and video), and much more.In addition, Internet Annoyances discusses how to design and host a personal web site something once thought of as only possible for the technically gifted. Topics like blogs, domain names, setup, HTML, fonts, and graphics and are all dissected and analyzed for easy consumption.Unlike other books on the subject, Internet Annoyances assumes readers already possess a working knowledge of the Internet. By fully recognizing the experience level of today's Internet culture, author Preston Galla is able to cut immediately to the chase and not waste time on the more obvious points. Internet Annoyances, therefore, is a quick read that presents succinct solutions for the many glitches that still populate the Internet experience.

Preston Gralla is the author of more than 20 books about computers and the Internet, including Windows XP Hacks and Windows XP Power Hound (both from O'Reilly). He's been writing about technology since the dawn of the PC, was a founding editor of both PC Week and PC/Computing, an executive editor at CNET/ZDNet, and contributor to dozens of publications, including PC Magazine, Computerworld, and the Los Angeles Times.