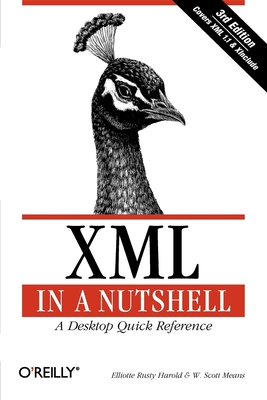 If you're a developer working with XML, you know there's a lot to know about XML, and the XML space is evolving almost moment by moment. But you don't need to commit every XML syntax, API, or XSLT transformation to memory; you only need to know where to find it. And if it's a detail that has to do with XML or its companion standards, you'll find it--clear, concise, useful, and well-organized--in the updated third edition of XML in a Nutshell.With XML in a Nutshell beside your keyboard, you'll be able to:

This powerful new edition is the comprehensive XML reference. Serious users of XML will find coverage on just about everything they need, from fundamental syntax rules, to details of DTD and XML Schema creation, to XSLT transformations, to APIs used for processing XML documents. XML in a Nutshell also covers XML 1.1, as well as updates to SAX2 and DOM Level 3 coverage. If you need explanation of how a technology works, or just need to quickly find the precise syntax for a particular piece, XML in a Nutshell puts the information at your fingertips.Simply put, XML in a Nutshell is the critical, must-have reference for any XML developer.
Elliotte Rusty Harold is originally from New Orleans to which he returns periodically in search of a decent bowl of gumbo. However, he currently resides in the Prospect Heights neighborhood of Brooklyn with his wife Beth, dog Shayna, and cat Marjorie (named after his mother-in-law). He's a frequent speaker at industry conferences including Software Development, Dr. Dobb's Architecure & Design World, SD Best Practices, Extreme Markup Languages, and too many user groups to count. His open source projects include the XOM Library for processing XML with Java and the Amateur media player.W. Scott Means has been a professional software developer since 1988, when he joined Microsoft Corporation at the age of 17. He was one of the original developers of OS/2 1.1 and Windows NT, and did some of the early work on the Microsoft Network for the Microsoft Advanced Technology and Business Development group. Since then he has written software for everything from multiplayer casino games to railroad geometry measurement equipment. For Scott's latest projects and musings on software development, visit his blog at smeans.com.