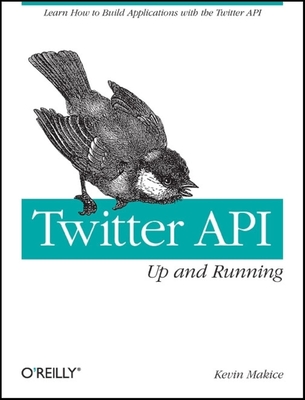 This groundbreaking book provides you with the skills and resources necessary to build web applications for Twitter. Perfect for new and casual programmers intrigued by the world of microblogging, Twitter API: Up and Running carefully explains how each part of Twitter's API works, with detailed examples that show you how to assemble those building blocks into practical and fun web applications. You'll also get a complete look at Twitter culture and learn how it has inspired programmers to build hundreds of tools and applications. With this book, you will:

Twitter offers a new way to connect with people on the Internet, and Twitter API: Up and Running takes you right to the heart of this technology.

Twitter API: Up and Running is a friendly, accessible introduction to the Twitter API. Even beginning web developers can have a working Twitter project before they know it. Sit down with this for a weekend and you're on your way to Twitter API mastery.--Alex Payne, Twitter API Lead

Twitter API: Up and Running is a very comprehensive and useful resource--any developer will feel the urge to code a Twitter-related application right after finishing the book --The Lollicode team, creators of Twitscoop

Kevin Makice is currently a Ph.D. student at the Indiana University School of Informatics, the first such doctoral program in the nation. His research interests center around local use of technology and the application of relational psychology to complexity and design. Prior to completing his Masters of Science in Human-Computer Interaction in 2006, Kevin was the primary Internet programmer for TicketsNow, a clearinghouse for sports, theatre, and entertainment tickets available in the secondary market. Along with three others, he won the CHI 2005 student competition by designing a concept for ad-hoc volunteering system for elderly residents in assisted-living centers. Past research includes political wikis, tangible interfaces for children's games, machinima, and network analysis of ball movement in basketball. Much of his blogging and academic efforts over the past year has focused on exploring Twitter as a means of community building.