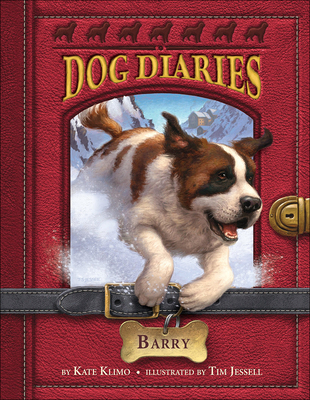 This is book number 3 in the Dog Diaries series.

Barry der Menschenretter--a.k.a. Barry--the most famous St. Bernard dog in history, tells the story of his life for the first time. Eight-thousand feet above sea level, in the treacherous pass in the Alps between Italy and Switzerland, the monks of the hospice of St. Bernard have, since the 11th century, kept dogs to help them rescue travelers lost in the snow. In time, these dogs became a breed unto themselves, named for the hospice. They are responsible for helping over 2,000 travelers who might otherwise have frozen to death. With great modesty, Barry tells not just about his own heroic exploits (saving over 40 lives, including that of a 12-year-old boy frozen in a cave), but about his daily life in the hospice, his close relationship with the brothers who train him, and about the other hospice hounds with whom he teams up to guide lost travelers and save lives. With realistic black-and-white illustrations by Tim Jessell--plus an appendix with information about St. Bernards, the Great St. Bernard Hospice, and much, more--Barry's tale is perfect for dog-crazy middle-grade readers.
KATE KLIMO is the author of many books for young readers, including the Dog Diaries series books "Ginger and Buddy.

TIM JESSELL is an award-winning illustrator whose work has appeared in numerous children's books. He is the illustrator of all the Dog Diaries series books.