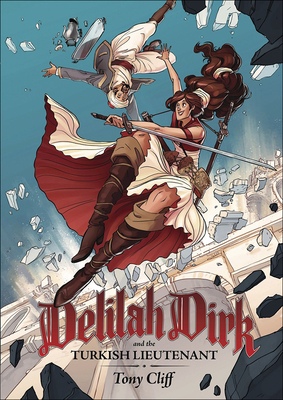 Lovable ne'er-do-well Delilah Dirk is an Indiana Jones for the 19th century. She has traveled to Japan, Indonesia, France, and even the New World. Using the skills she's picked up on the way, Delilah's adventures continue as she plots to rob a rich and corrupt Sultan in Constantinople. With the aid of her flying boat and her newfound friend, Selim, she evades the Sultan's guards, leaves angry pirates in the dust, and fights her way through the countryside. For Delilah, one adventure leads to the next in this thrilling and funny installment in her exciting life.

A little bit Tintin, a little bit Indiana Jones, Tony Cliff's "Delilah Dirk and the Turkish Lieutenant "is a great pick for any reader looking for a smart and foolhardy heroine...and globetrotting adventures.