The Great Work: Our Way into the Future (Paperback) 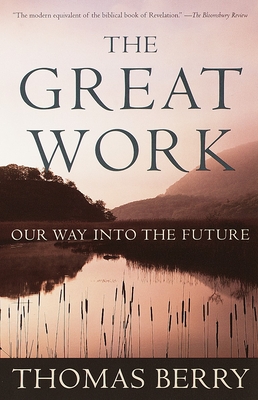 The Great Work: Our Way into the Future (Paperback)


Backordered
Thomas Berry is one of the most eminent cultural historians of our time. Here he presents the culmination of his ideas and urges us to move from being a disrupting force on the Earth to a benign presence. This transition is the Great Work -- the most necessary and most ennobling work we will ever undertake. Berry's message is not one of doom but of hope. He reminds society of its function, particularly the universities and other educational institutions whose role is to guide students into an appreciation rather than an exploitation of the world around them. Berry is the leading spokesperson for the Earth, and his profound ecological insight illuminates the path we need to take in the realms of ethics, politics, economics, and education if both we and the planet are to survive.
Thomas Berry founded the History of Religions Program at Fordham University and the Riverdale Center of Religious Research. He has served as president of the American Teilhard de Chardin Association, and won a Lannan Foundation Award for The Dream of the Earth. Together with the scientist Brian Swimme, he wrote The Universe Story: A Celebration of the Unfolding of the Cosmos. He lives in the hill country of the Southern Appalachians.
"Berry believes we stand at a defining moment in history, one in which the earth itself calls out to us to embark upon a resacralization of nature, a new ecological beginning. Berry is our conscience, our prophet, our guide. He speaks to what is best within us, in a voice that is inclusive, ecumenical, generous, and wise. His Great Work should -- and must -- be ours."
-- Chet Raymo, Orion