Who Cooked the Last Supper?: The Women's History of the World (Paperback) 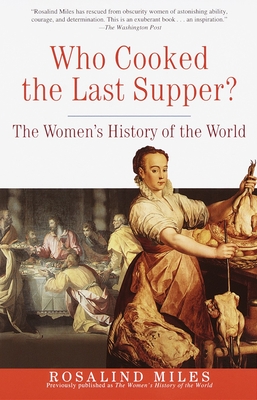 Who Cooked the Last Supper?: The Women's History of the World (Paperback)


In Stock—Click for Locations
Who Cooked the Last Supper? overturns the phallusy of history and gives voice to the untold history of the world: the contributions of millions of unsung women.

Men dominate history because men write history. There have been many heroes, but no heroines. Here, in Who Cooked the Last Supper?, is the history you never learned--but should have!

Without politics or polemics, this brilliant and witty book overturns centuries of preconceptions to restore women to their rightful place at the center of culture, revolution, empire, war, and peace. Spiced with tales of individual women who have shaped civilization, celebrating the work and lives of women around the world, and distinguished by a wealth of research, Who Cooked the Last Supper? redefines our concept of historical reality.
Rosalind Miles, Ph.D., is a well-known and critically acclaimed English novelist, essayist, lecturer, and BBC broadcaster. Educated at Oxford and the Universities of Leicester and Birmingham, she is the founder of the Center for Women's Studies at Coventry Polytechnic in England. Her novels, including Guenevere, Queen of the Summer Country and The Knight of the Sacred Lake, have been international bestsellers. She divides her time between homes in England and California. Her website address is www.rosalind.net.
"One of the best [books on women's history]. . . detailed, witty, balanced, and inexorable."
— A.S. Byatt

"Since Miles looks back in anger it is fortunate she also possesses a sense of humor....Her book has been written to alleviate a genuine injustice, the ignoring of women's roles in history."
— Antonia Fraser