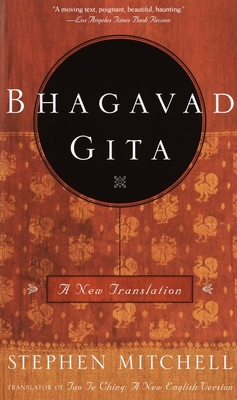 
On Our Shelves Now at:
Stephen Mitchell is widely known for his ability to make ancient masterpieces thrillingly new, to step in where many have tried before and create versions that are definitive for our time. His celebrated version of the Tao Te Ching is the most popular edition in print, and his translations of Jesus, Rilke, Genesis, and Job have won the hearts of readers and critics alike. Stephen Mitchell now brings to the Bhagavad Gita his gift for breathing new life into sacred texts.

The Bhagavad Gita is universally acknowledged as one of the world's literary and spiritual masterpieces. It is the core text of the Hindu tradition and has been treasured by American writers from Emerson and Thoreau to T. S. Eliot, who called it the greatest philosophical poem after the Divine Comedy. There have been more than two hundred English translations of the Gita, including many competent literal versions, but not one of them is a superlative literary text in its own right.

Now all that has changed. Stephen Mitchell's Bhagavad Gita sings with the clarity, the vigor, and the intensity of the original Sanskrit. It will, as William Arrowsmith said of Mitchell's translation of The Sonnets to Orpheus, "instantly make every other rendering obsolete."
Stephen Mitchell's many books include The Selected Poetry of Rainer Maria Rilke, The Book of Job, Tao Te Ching, Parables and Portraits, The Gospel According to Jesus, Meetings with the Archangel, and The Frog Prince.
"Of this world-beloved, timeless classic this is the most poetic rendition."
-- Huston Smith