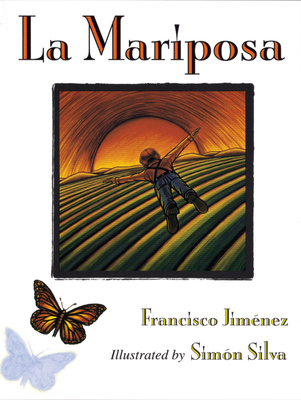 In his first year of school, Francisco understands little of what his teacher says. But he is drawn to the silent, slow-moving caterpillar in the jar next to his desk. He knows caterpillars turn into butterflies, but just how do they do it? To find out, he studies the words in a butterfly book so many times that he can close his eyes and see the black letters, but he still can't understand their meaning. Illustrated with paintings as deep and rich as the wings of a butterfly, this honest, unsentimental account of a schoolchild's struggle to learn language reveals that our imaginations powerfully sustain us. La Mariposa makes a subtle plea for tolerance in our homes, our communities, and in our schools.

Francisco Jiménez emigrated from Tlaquepaque, Mexico, to California, where he worked for many years in the fields with his family. He received both his master’s degree and his Ph.D. from Columbia University and is now the chairman of the Modern Languages and Literature Department at Santa Clara University, the setting of much of his newest novel, Reaching Out. He is the Pura Belpre Honor winning author of The Circuit, Breaking Through, and La Mariposa. He is also the recipient of the John Steinbeck Award. He lives with his family in Santa Clara, California.

"Held back in school because he did not speak English well enough, the author speaks of himself in the third-person to tell this autobiographical story of a school incident. Francisco is a young immigrant boy from Mexico trying to adjust to first grade in the US. Unlike the other children, Francisco wears suspenders, does not understand school bells, and can't comprehend a word his teacher is saying. His fascination with a caterpillar in a jar leads to flights of fancy; he imagines himself flying out of the classroom and over the rows of lettuce where his father works. Difficulties include a misunderstanding that leads to a fight with classmate Curtis. . . . Jiménez successfully captures the confusion and isolation of his protagonist in an unembellished, straightforward narration. . . . Silva's characters are strongly outlined in black, and his robust scenes of landscapes and classrooms are rich with the oranges of the monarch, echoed in fields, sunsets, and the flannel of Francisco's shirt." Kirkus Reviews

"La Mariposa is a lovely story that addresses so many of the transformations in the life of a young bicultural, bilingual child. It’s refreshing to read a book in which English is flavored with Spanish and in which Latinos present positive and generous role models." —Julia Alvarez

“This moving story of a Spanish-speaking child surviving his first year in school touches the heart. It also dramatically reminds us that if we are to save the children, the schools must nurture the child’s language.” --Rudolfo Anaya —