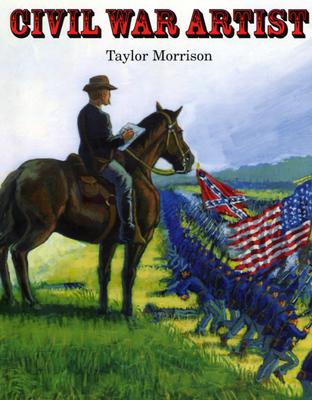 William Forbes arrives in New York in 1861, eager to start a career as an artist. When he has difficulty finding work, he signs on with Burton’s Illustrated News to sketch the battles of the Civil War. This historical account shows how the news was reported, from William’s sketches of dangerous battle scenes through the making of a wood engraving and finally to the printed page of the newspapers of the day.

Taylor Morrison pairs his artistic talent with extensive research to bring readers engaging nonfiction picturebooks. A graduate of the Rhode Island School of Design, he has illustrated several books for children. He was born in Kansas, raised in Illinois, and now makes his home in Oregon.

This unusual book introduces the process by which pictures of Civil War battles reached the public. The fictional story line begins in 1861. Artist William Forbes joins a corps of artists sent to the Virginia battlegrounds, sketches the soldiers in action, and completes a detailed drawing of the scene, which he sends by courier to Burton's Illustrated News in New York City. The heart of the book details the complex process of transferring the pencil drawing to a wood-block ink drawing to an engraving to an electrotype, which can be printed in the newspaper and distributed. A glossary of terms is appended. Apart from a long, confusing paragraph on electrotyping, the writing is clear as it splits the treatment into two distinct parts, the fictional story of Forbes and the technical process of printing. Well-designed and illustrated with attractive paintings, Morrison's book succeeds in documenting and making accessible a little-known aspect of history.

It took four weeks for illustrations of scenes from the US's Civil War battles to make it from the front lines to readers' hands; Morrison (Cheetah, 1998, etc.) explains that process in his uniquely handsome book. Morrison introduces the fictional artist, William Forbes, commissioned by the fictional Burton's Illustrated News to follow the Union Army into battle at Bull Run. Throughout the day's fighting Forbes makes quick sketches; it is risky business, and he is often in mortal peril. That night he makes a more complete drawing, which is handed to a courier and taken back to the Burton offices. There, engravers set to work translating Forbes's drawing to a grid of wood blocks (Morrison includes interesting incidentals along the way, giving the process its due). The images are converted to electrotype, whereafter it is finally ready for the operators and pressman. Shortly after that, the newsboys are seen hawking the illustrated weekly, containing Forbes's image a mere month after the actual event. Morrison successfully renders the complexities of illustrating newspapers 150 years ago, and just as successfully conveys that in abandoning the wood block for the photograph, some of the art was sacrificed for speed.
Kirkus Reviews —