His Name Was Raoul Wallenberg (Hardcover) 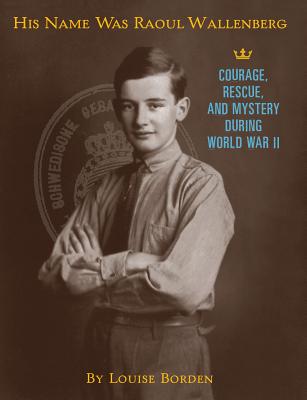 His Name Was Raoul Wallenberg (Hardcover)

An amazing and inspirational World War II story about how one man saved the lives of many.

Raoul Wallenberg’s name may not be a universally familiar one, but the impact he had is immeasurable. Wallenberg was a Swedish humanitarian who worked in Budapest during World War II to rescue Jews from the Holocaust. He did this by issuing protective passports and housing Jews in buildings established as Swedish territory, saving tens of thousands of lives. Louise Borden researched Wallenberg’s life for many years, visiting with his family and the site of his childhood home, and learned his story from beginning to end. Wallenberg himself has not been heard from since 1945. It is suspected he died while in Russian custody, though this has never been proven. Raoul Wallenberg . . . it’s a name you may not have known, but you’ll never forget his story.

Louise Borden is the highly regarded author of many books, including Good Luck, Mrs. K!, Sleds on Boston Common, Good-bye, Charles Lindbergh and The Little Ships: The Heroic Rescue at Dunkirk in WW II, published by Margaret McElderry Books, and The Journey That Saved Curious George, Across the Blue Pacific, and His Name Was Raoul Wallenberg, published by HMH. She lives with her husband, Pete, in Cincinnati, Ohio, and has three grown children. Her website can be found at www.louiseborden.com.
"Moving and inspiring; Wallenberg’s is a name to remember for all time, and Borden has done an admirable job of ensuring readers will."—Kirkus "Borden's extensive research is evident throughout. Abundant photographs add immediacy to the narrative, and the double-spaced text and wide margins make the book accessible to students with reading difficulties."--School Library Journal, starred review "Borden takes a little-known story from history and gives it new life and appeal via meticulous research and deft presentation...a compelling and readable nonfiction gem."--VOYA"Scrupulously researched...The story is riveting, and the stylish prose, in compact, ragged-right format, provides a sense of urgency and mystery."--Bulletin