The Rise and Fall of Senator Joe Mccarthy (Hardcover) 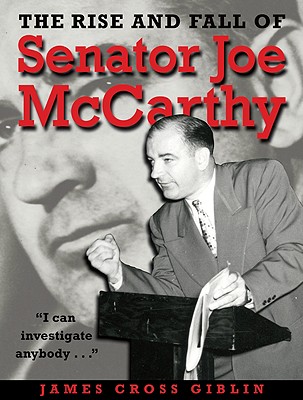 The Rise and Fall of Senator Joe Mccarthy (Hardcover)

When Cold War tension was at its height, Joseph ("call me Joe") McCarthy conducted an anti-Communist crusade endorsed by millions of Americans, despite his unfair and unconstitutional methods. Award-winning writer James Cross Giblin tells the story of a man whose priorities centered on power and media attention and who stopped at nothing to obtain both. The strengths and weaknesses of the man and the system that permitted his rise are explored in this authoritative, lucid biography, which sets McCarthy's life against a teeming backdrop of world affairs and struggles between military and political rivals at home. Chapter notes, bibliography, index.

James Cross Giblin (1933-2016) was the author of more than twenty critically acclaimed books for young people. His book The Life and Death of Adolf Hitler received the Robert F. Sibert Award for Informational Books.

Timely and significant...If I were a high school teacher concentrating on the postwar era, I would devote a good part of my course to discussing this book for the cautionary tale it tells."--New York Times Book Review

"Giblin's unmistakable research and passion for the subject add up to a comprehensive portrayal of a complex figure. Abundant source notes and further reading suggestions conclude this expansive undertaking."--Publishers Weekly