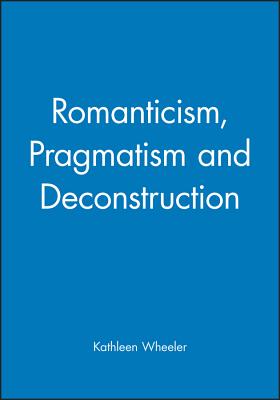 
Not On Our Shelves—Ships in 1-5 Days
This book is an examination of three major literary, critical and philosophical movements in European and Anglo-American literature. It aims to show their differences (often pointed out) and their similarities (never yet demonstrated) and to make accessible recent post-structuralist theory. In particular, it offers an introductory exposition of American pragmatism whose insights into language and philosophy are discussed in relation both to Coleridge and to Derrida, while Derrida's writings are related both to romanticism and pragmatism.
Kathleen Wheeler is Lecturer in English at the University of Cambridge. She has published a book on Coleridge's poetry, edited an anthology of German Romantic Criticism, and has recently finished a book on Modernist Women Writers. She is presently working on a study of the literary strategies of certain philosophers, such as Plato, Berkeley and others.