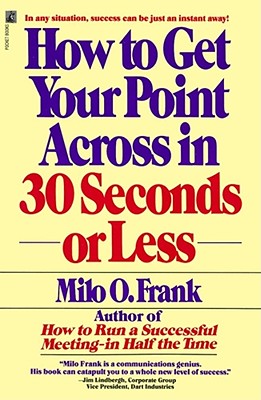 
Not On Our Shelves—Ships in 1-5 Days
Learn how to get your listener’s attention, keep her interest, and make your point—all in thirty seconds!

Milo Frank, America’s foremost business communications consultant, shows you how to focus your objectives, utilize the “hook” technique, use the secrets of TV and advertising writers, tell terrific anecdotes that make your point, shine in meetings and question-and-answer sessions, and more!

These proven techniques give you the edge that successful people share—the art of communicating quickly, precisely, and powerfully!
Milo Ogden Frank is a nationally acclaimed authority on communications skills and strategies. His proven techniques have brought him success in an extraordinary career as an actors’ agent, Director of Talent and Casting for CBS Television, a writer-producer of feature films at MGM, and vice president in charge of production for Cinerama. Mr. Frank died in 2004.
Jim Lindbergh Corporate Group Vice President, Dart Industries Milo Frank is a communications genius. His book can catapult you to a whole new level of success.

Charlton Heston Communicating may be the most important skill the human animal possesses. Milo Frank's book tells how to do it well and succinctly...which means well.