To The Stars: Autobiography of George Takei (Star Trek ) (Paperback) 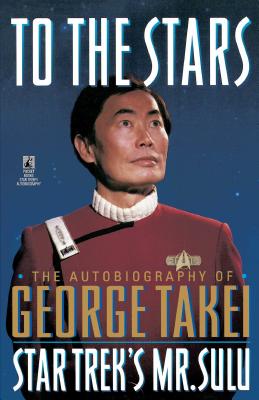 To The Stars: Autobiography of George Takei (Star Trek ) (Paperback)


Not On Our Shelves—Ships in 1-5 Days
Best known as Mr. Sulu, helmsman of the Starship Enterprise™ and captain of the Starship Excelsior, George Takei is beloved by millions as part of the command team that has taken audiences to new vistas of adventure in Star Trek®—the unprecedented television and feature film phenomenon.

From the program’s birth in the changing world of the 1960s and death at the hands of the network to its rebirth in the hearts and minds of loyal fans, the Star Trek story has blazed its own path into our recent cultural history, leading to a series of blockbuster feature films and three new versions of Star Trek for television.

The Star Trek story is one of boundless hope and crushing disappointment, wrenching rivalries and incredible achievements. It is also the story of how, after nearly thirty years, the cast of characters from a unique but poorly rated television show have come to be known to millions of Americans and people around the world as family.

For George Takei, the Star Trek adventure is intertwined with his personal odyssey through adversity in which four-year-old George and his family were forced by the United States government into internment camps during World War II.

Star Trek means much more to George Takei than an extraordinary career that has spanned thirty years. For an American whose ideals faced such a severe test, Star Trek represents a shining embodiment of the American Dream—the promise of an optimistic future in which people from all over the world contribute to a common destiny.
George Takei is an actor, activist, and New York Times bestselling author. He is best known for his role of Mr. Sulu in the acclaimed television and film series Star Trek. Takei has been featured in over forty films and he has made hundreds of guest-starring television appearances. He also developed the award-winning Broadway musical Allegiance. Takei is a proponent of gay rights and is a member of the Human Rights Campaign. He has also won several awards for his work on Japanese-American relations, which includes serving as Chairman Emeritus of the Japanese American National Museum's Board of Trustees; a member of the US-Japan Bridging Foundation Board of Directors; and served on the Board of the Japan-United States Friendship Commission. He is the author of three books, including his memoir To the Stars, as well as Oh Myyy! There Goes The Internet, and its sequel, Lions And Tigers And Bears: The Internet Strikes Back.